Twice the Fun At Elitch Gardens 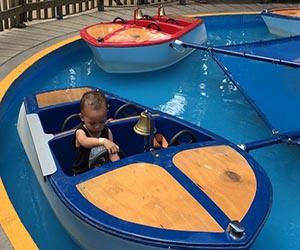 Last month my family and I spent the day at Denver’s Elitch Gardens.  This Theme and Water Park is located within view of Denver’s Sports Authority at Mile High Stadium, the Bronco’s home field.  It’s really 2 parks in one.  Yes, it’s twice the fun at Elitch Gardens!

An admission ticket gains you access to both the water park and theme park on the same day.  And you can go back and forth between the two if you so choose.  Once you enter the park you can head to the water park directly in front of you or veer left to the theme park.

We decided to go to Elitch Gardens on a Tuesday, a good choice according to my daughter, Jaime, who actually has season passes for the park.  She said weekends were very busy, specially in the summer.  We arrived early, a few minutes before the park opened.  Parking was easy, we found a space not far from the main entrance.  By the way parking in the main lot is $15 for the day, but if you have season passes parking is included.

After presenting our tickets at the turnstile we headed straight for the water park side, it’s called Island Kingdom.[spacer height=”20px” id=”2″]

We found lounge chairs under some big umbrellas in front of Hook’s Lagoon, the kids’ splash zone, and settled my husband in with all our stuff.  He’s not much for getting wet so he’d hang out with our stuff while we went to play, he only asked that we bring cold drinks and snacks back from time to time.

We had wanted to drift along the lazy river ride first so we headed for Castaway Creek on the right side of the wave pool which is pretty much the first attraction you’ll see when you enter, other than the big slides overhead that is.  But when we got to Castaway Creek it was closed and wouldn’t open for another 30 minutes, so we spent that time in  Commotion Ocean, the park’s wave pool.

The wave pool generates mild waves, at least to us they’re mild, we’re from Hawaii and know all about waves.  But the kids enjoyed bouncing around for a couple of cycles.  Waves are generated in cycles that last a few minutes then resets for a time between cycles.

When we saw people headed for Castaway Creek we knew it was time to head back over and get in line for that ride.  The entrance to Castaway Creek is just before Splashdown, the park’s raft ride.  We found lines for both attractions while folks were waiting for them to open.

The wait wasn’t very long and we soon grabbed tubes and were on our way along the river.  Lazy isn’t really the best description for this ride.  Sure there are stretches of calm where you float peacefully along but there’s a bit of action when you come across waterfalls and geysers along the route.  You will get wet, sometimes very wet when you have a grandson you shoves you under every waterfall!

We went around the river a couple of times then decided we should check in with Dad, it was probably time to bring him a cold beer and some snacks.

On the way out we stopped to watch the raft riders on Splashdown.  We were trying to decide whether or not to ride it.  In the end we opted to skip it, basically we because we didn’t want to climb the stairs that led to the ride.  But it looked fun, hopefully next time!

Sure enough Dad was ready for something cold!  Problem easily solved by a quick trip to the Island Breeze Cafe and Hydration Station.

The Cafe offers cold beer as well as mile high nachos, pizza, and pretzels.  The Hydration Station sells cold sodas, bottled water, and Icees.  You can order everything from one window, so you don’t have to wait in 2 different lines.  Be sure to bring an ID if you’re ordering beer, they will ask for it.

If you’re looking for burgers or brats walk over to Captain Hook’s Grill behind the cafe or grab some space age ice cream at the Dippin’ Dot kiosk.

We opted for the mile high nachos, beer, and sodas.  They hit the spot just fine!

We spent another couple of hours sliding down the many water slides while 2 year old Jett splashed around Hook’s Lagoon, sometimes joined by his cousins Dion and Devon.

When the boys had their fill of the water park we got everyone dried and dressed then headed for the theme park side.  The parks are divided by a “main street” like pedestrian zone that’s lined with shops and restaurants.

You’ll know your in the theme park when you reach the ferris wheel!

The theme park is basically divided into 2 sections, the kiddie park to the left of the ferris wheel and the thrill rides on the right and behind it.

We started out in the kiddie section so Jett could ride his favorites, mostly the motorcycles, boats, and trucks.

This area also has a play area with slides, pit balls, and nets, and is also where the Fisher Price show plays several times a day.  The schedule is posted by the theater area.

There’s definitely a lot for smaller kids to do here, but we also had 14 year old Dion with us, and he was ready to try out the coasters.  We headed for the thrill ride area so he and his Auntie Jaime could try out some coasters.  I actually rode the Hollywood & Vine with them.  It’s a spinning ride that just goes faster and faster.  That was thrilling enough for me!  I passed on the coasters!

But Jaime and Dion rode a few coasters including the Brain Drain and the Sidewinder both coasters with loops.  We all drew the line at riding the Sling Shot and Bungee Rides.

The Sling Shot and Bungee rides both require a separate ticket.  You can buy them at the ticket booth in front of the rides.  I believe they were $19.99 per rider per ride.

We may not have wanted to ride it, but we all enjoyed watching those who dared to![spacer height=”20px” id=”2″]

By late afternoon we were all tired and ready to go home.  We cooled off with ice cream at the Sundae Shop and picked up a few souvenirs, fudge, and kettle corn before heading home.  It was twice the fun at Elitch Gardens!

Many thanks to Jolie DuBois, Communications and Interactive Marketing Manager for Elitch Gardens Theme and Water Park, for the passes she provided our family!  We had a blast!

To plan your family’s day at Elitch Gardens click here!