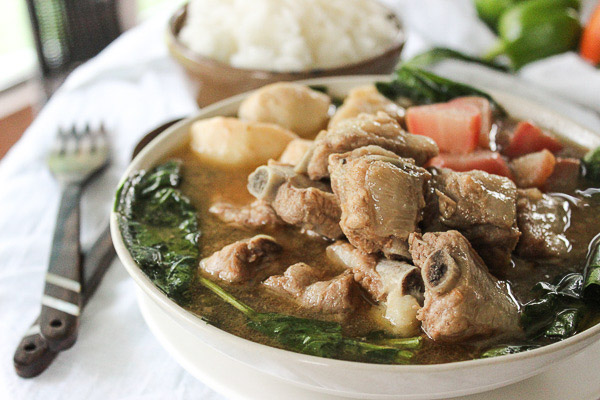 So on my first attempt to cook Sinigang/Tamarind therefore up, i used to be uninformed. I threw all the ingredients during a pot, simmered the soup till the meat was tender and voila! I’m the simplest cook ever!Little did i do know that I had been missing out on the flavors that every ingredient provides to the current savory, sour, delicious soup. Although, my previous instruction for Sinigang found here will still be employed in a pinch, the Tamarind Soup instruction that I’m that includes during this post could be a crowd entertainer.

Sinigang could be a Filipino term for a sour/tart and savory soup poached with vegetables and meat or fish though pork and fish area unit the foremost ordinarily used. There are a unit completely different versions of “Sinigang” that use alternative vegetables/fruits that build the soup tart/sour however Tamarind or in Filipino “Sampalok” is that the preferred. I keep in mind after I was a baby growing up within the Philippines; raw tamarind picked from our yard was stewed and strained to flavor the soup. Nowadays, a Tamarind flavor packet is most well-liked by most Filipino households since it’s less time intense. Tamarind flavor packets or Sampalok combine from the Philippines area unit sometimes obtainable in any Asian market within the America.

One of the most ingredients of Sinigang/Tamarind Soup could be a vegetable known as “Gabi” pronounced as “gah-bee”. It’s a gentle flavor and also the texture is comparable to a dense potato once poached. i’m excited and grateful that this harvest is currently being oversubscribed at non-Asian grocery stores with varied names like Eddo/Eddoe Taro or Xanthosoma atrovirens.I also mention “water spinach” or “Kangkong” on the ingredient list below. it’s a vegetable ordinarily used for Sinigang/Tamarind Soup however seldom oversubscribed in tiny America town – Asian grocery stores therefore i take advantage of regular spinach or herbaceous plant instead.

1. Saute garlic and onions in a large pot/casserole on low-medium heat until tender
2. Add pork and 3 tbps fish sauce, mix and cover for about 10 minutes. Mix often to brown meat evenly.
3. Add water gradually, enough to barely cover the pork, cover for about 10 mins
4. For a clear broth, remove pork residue by skimming surface of water, throw residue away.
5. Add more water if needed, still barely covering the pork
6. Add 1 packet of Tamarind Soup Mix, taste and gradually add more according to preference ( I usually use 1 and 1/2 pack of the tamarind soup mix)
7. Add Eddo Taro/Malanga/Gabi, mix, simmer and cover for 30-40 minutes
8. Gradually add more fish sauce (use a tablespoon!) according to taste
9. Check pork and taro if tender, then add Spinach/Kangkong (water spinach), mix and simmer on low uncovered for 5-10minutes
Serve hot with a side of steamed rice 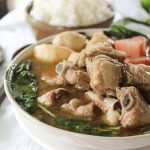