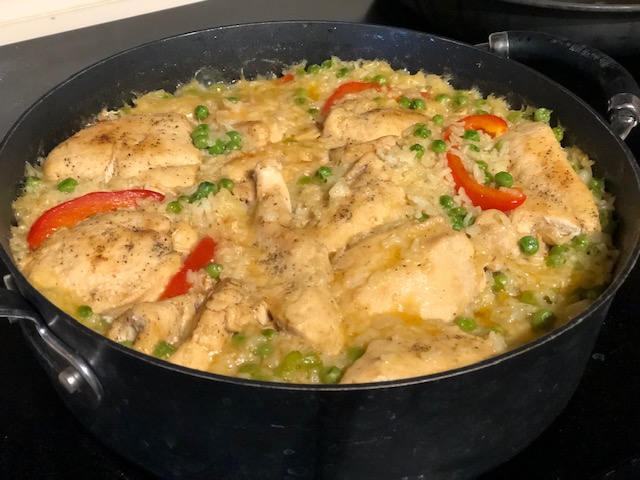 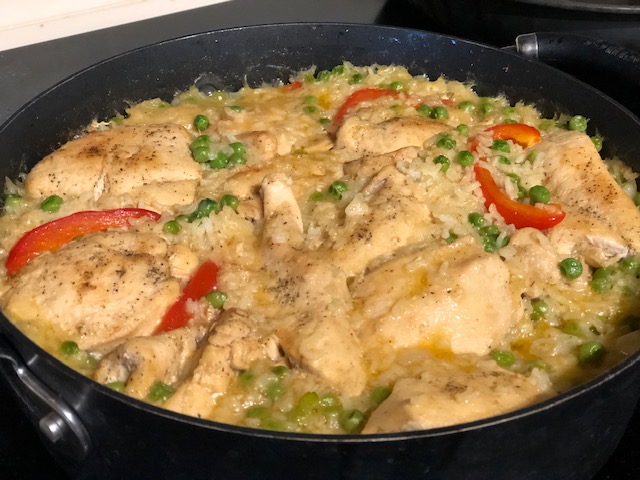 Paella is probably Spain’s most popular dish.  It originated in the Valencia region located in Eastern Spain but can be found worldwide specially in countries that were once part of colonial Spain namely Cuba and the Philippines where it is also call Arroz Valenciana.

The word Paella mean “pan” in the Valencian dialect.  It is usually made and served in a “paella” pan which is basically a somewhat flat shallow skillet with or without a cover.  It is typically made with Bomba rice, a short grain rice variety cultivated in Spain’s eastern region.  Traditional Valencian Paella includes some type of meat such as chicken, duck, or rabbit, and some type of green bean.  It’s iconic yellow colored rice is achieved by adding saffron threads while cooking.

In modern time Paella has been adapted to use ingredients easily found in different areas of the country.  One of the most popular, an my favorite is Paella de Marisco which is seafood mixed with the rice.  This usually has shrimp, mussels or clams, squid, and sometimes lobster; is usually omits the vegetables.  Then there’s Paella Mixta which combines meats including Chorizo (Spanish pork sausage), seafood, and vegetables.  In short these days you can pretty much put whatever you want in a pealla.  My husband prefers chicken or vegetarian Paella.

When I was growing up surrounded by grandmothers, aunts, and uncles many of whom were fantastic cooks, Arroz Valenciana or Paella was a treat.  It would certainly be on a party menu, specially at Christmas.  These days I usually have to get my Paella fix in Spain.  It’s always one of our favorites when we’re in Barcelona, Majorca, or any part of Spain.

But since our yearly visits to Spain will not be possible this year we’ve found ourselves missing our favorite Spanish foods.  That’s why I’ve been making tapas boards lately.  I’ve also been making Paella.  In fact I’ve been making it often enough that’s I’ve recently decided to order a paella pan.

Today I’ll share my recipe for Chicken Paella because it’s ingredients are probably the easiest to find.  In fact you may already have it in your kitchen pantry.  I mentioned that Paellas are typically made with Bomba rice, but it’s not always easy to find in the US, at least in Hawaii.  I usually use Japanese short grain rice, the type you use to make sushi which is always found at any Asian market.  Saffron is not easily found in regular supermarkets  because it’s pretty expensive.  I usually buy Saffron when I’m in Turkey or the Middle East where it’s readily available at the local spice markets at a reasonably lower price.  If you don’t have Saffron you can use ground Turmeric to tint the rice yellow, but don’t use too much as it will leave a different flavor than what you want to achieve.  I’d use no more than a teaspoon of turmeric powder dissolved in a cup of chicken stock.

Stir Saffron into wine and set aside.

Place thighs in heated oil skin side down and cook until golden brown, about 6-7 minutes.

Turn over and cook another 4-5 minutes.

Remove chicken from pan and set aside.  (You may have to cook chicken in batches depending on how big your pan is and how many thighs you are using.)

Add onions, garlic, and thyme to pan.  Cook for about 2 minutes, stir constantly to keep it from burning.

Add Rice and cook another 2 minutes while stirring constantly.

Add wine and cook until liquid is reduced by half.

Place chicken skin side  up on top of rice, cover, reduce heat to medium.

Simmer about 18 minutes until rice is almost cooked, it should be “al dente”.

Remove cover and add peas and pepper evenly over the pan.

Turn up heat to medium high and cook another 5 minutes or until rice begins to brown on the bottom and sides.

Remove from heat and sprinkle with parsley.

This dish pairs well with a pitcher of Sangria or a nice bottle of fruity red wine or a Chardonnay for white wine lovers. 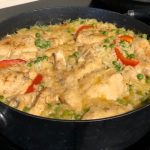