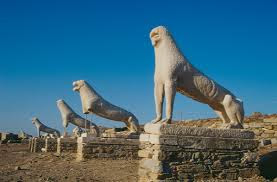 Mykonos is a Greek island in the Aegean Sea. It’s part of the Cyclades group of islands.

Mykonos is  a popular cruise ship port and is famous for its glamorous party atmosphere  made popular  in the 1960’s by Jackie Kennedy Onasis, Sophia Loren, and other famous icons of the time.  Today it attracts the trendy crowd of Hollywood elite including Madonna, Tom Hanks, P Diddy, and Sara Jessica Parker, as well as famous designers like Roberto Cavalli and Jean Paul Gaultier.

Mykonos is trendy and chic; it attracts singles who want to have fun in the sun in the many beaches that have lively bars and cafes.  It’s still a magnet for Greek and international celebrities who flock to the island in the summer, attracted by the trendy bars, stylish cafés, upscale restaurants, and fashionable boutiques in the cosmopolitan island atmosphere.

Sounds like a fun party island right?  Ideal for singles and even couples who want to frolic scantily clad at Paradise or Super Paradise Beach, 2 island beaches that are famous or perhaps infamous for topless and sometimes nude sunbathing.  These beaches are home to bars and cafes where the party really begins after sunset.  But what about couples looking for romance and families looking for fun in the sun without nudity?  No worries, Mykonos has romance and family fun too!

If you’re looking for romance there are many ocean view restaurants, bars, and cafes where you can have a drink or a meal with your significant other.  Or if you prefer a quieter spot there are many places in the island’s picturesque towns.

If you’re a family looking for ways to entertain kids of different ages read on!  Here are some kid friendly activities for the whole family on the island.

Everyone, or nearly everyone loves beaches!  There are many on the island.  But if the kids are with you opt for the family beaches such as Platis Gialos, Psarrou, or Kalafatis just to name a few.  All of these beaches have restaurants, watersport rentals and activities, and lounge chair and umbrella rentals.

Most beaches on Mykonos can be easily reached by bus or taxi.

If you’re on a cruise ship and only have a few hours on the island you can book a shore excursion from the ship that will take you to one of the family beaches.  Or you can catch a taxi at the main square in Chora, the town closest to the ports or a bus from the local station.  Taxis are very limited on the island and if there are several ships at port you may find a long cue for a cab.

Otherwise if you just want to sunbathe and let the kids splash in the water and play in the sand there’s a small beach as you walk from the bus station to the town.  There are no amenities, but the town with all its shops and cafes are just foot steps away.

Older kids and adults might enjoy a visit to Delos. Delos is another island of the Cyclades group.  Today it’s a important archaeological site that encompasses temples, markets, houses, and the famous Terrace of the Lions statues.  The island’s archaeological museum houses many of the artifacts found from excavations of the site.

You can book a tour with one of the local tour companies in Chora or catch a ferry and wander the island on your own.  Boats to Delos leave from the docks in Chora in the morning thru the afternoon.   You really don’t want to be on Delos long, and definitely not in the midday heat.  Be sure to put on lots of sunscreen, bring a hat, and bottled water.  Today the island is uninhabited so there are no cafes, restaurants, or shops.

If you’ve had enough of the beach and are looking for something to eat you don’t have to go far before you run into a cafe, restaurant, or snack bar.

There are many restaurants along the ocean front in Chora, but for a quick gelato we like to take the kids to one of the snack bars in the middle of town.  That way the kids can have their gelato while the rest of us shop.

But when it’s time for lunch or dinner we usually frequent the Music Cafe or one of the ones by the windmills or in Little Venice.  Believe there is no lack of food establishments on the island!  My daughters love the Saganaki!

Speaking of windmills, the kids love hiking up to the windmills on the other end of town.

The like to run around the wide open space by the windmills.  It’s a good spot to let them burn off some excess energy.

For the more adventurous how about renting some quads?  My daughter and her husband love to run around the island on these vehicles.  Last time they took my grandsons Dion and Devon while my husband and I stayed in town to hang out with then 10 month old Jett.

The rental company is located at the end of town, one street up from the main street that runs along the coast.   You can rent them hourly for by the day.  Helmets are provided with each vehicle.

Whatever you decide to do on Mykonos save some time to relax!  It’s a wonderful island filled with friendly people, and delicious food!