Inside Santorini – Off the Beaten Path 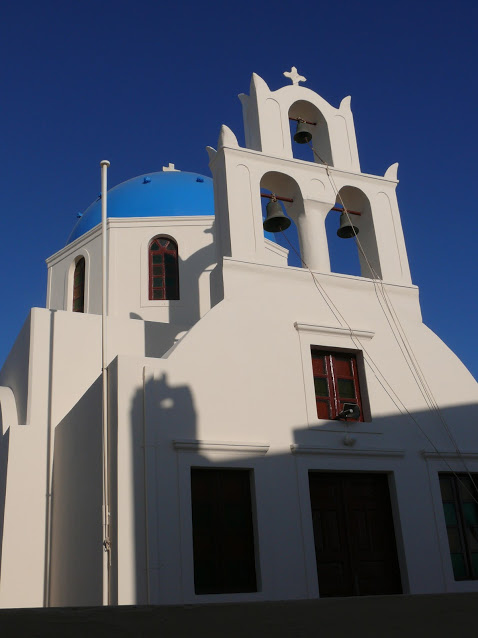 When we think of Santorini pictures of white washed houses with blue domes and pristine blue waters come to mind.

I’m pretty sure everyone has seen pictures of the iconic churches located in the main town of Fira and the quaint village of Oia on the island of Santorini.

Fira and Oia are probably the most visited towns on the island.  They’re always bustling with tourists, specially when a cruise ship or two are anchored in the bay.

There’s no question they are beautiful towns and should be visited.  But they aren’t the only villages in Santorini.

If you want to experience Santorini like a local then you must get off the beaten path and take a trip to the interior villages.

Here a couple of interesting Santorini towns and attractions you might want to explore.  It’s a great way to escape the crowds in Fira and Oia, even for just a little while.  [spacer height=”-20px”]

Megalochori  is one of the most picturesque villages on Santorini.  Its existence goes back to the 17th. Century and is home to many historical mansions, traditional homes, pirate hideaways, vineyards, and wineries.

The village has a long history of wealthy merchants and land barons who produced and exported Vinsanto, a sweet wine that is still produced today.

Many of the mansions are surrounded by high walls with solid wooden doors to guard against marauding pirates.

The local residents and business men have kept this village true to the original settlements.  Many of the old buildings have been restored to it’s former glory.

There are many churches in the village, many of which started out as private chapels built by wealthy landowners.

In the center of the town there’s the main square that is the center of all village life.  The square has a few taverns and restaurants and shade tress, the perfect spot for a nice cup of coffee and watch the villagers play cards or backgammon.

Narrow winding streets branch out in all directions from the square, perfect for a quiet wander to see what surprises await!

Getting to Megalochori is easy.  You can take a taxi from the taxi station in Fira or whatever village you happen to be in.  Or take the bus from the station.

If you prefer to stay in Megalochori there are some very luxurious hotels in the area or you can rent a mansion or villa!  This is definitely a great option if you’re looking for a romantic get-away!

Emporio is the largest village in Santorini.  According to the last census in 2011 there are 4000 residents in the village.

It’s a beautiful traditional village with lots of Venetian influence.

One of it’s main attractions is the Venetian fortress called the Kasteli, it’s one of the 5 fortified medieval castles of Santorini.

Inside the Kasteli you’ll find an old church that dates back to the 16th. Century or earlier.

Recently the local residents have been restoring the Kasteli and converting much of the space into artist workshops and boutiques.

You’ll also find many churches in Emporio.  Some built with the iconic blue domed roofs and others in different styles.

There are also some shops and restaurants in the village.  But for me the main attraction were picturesque houses you find as you wander the narrow paths in the village.

You’ll even find some enterprising young residents who set up tables in front of their houses to sell locally made honey!

Perissa is a small seaside village on the base of Mesa Vuono mountain.  It is part of the Emporio settlement of Santorini.

One of the largest churches in Santorini, the Church of the Holy Cross is in the center of the village square.  You can also visit the Museum of The Minerals and Fossils of Thera and see a collection of minerals and fossils from all over the world.

But the main reason visitors go to Perissa is the black sand beach with clear blue water.  The beach is very organized with a small waterpark, playground, sun loungers, umbrellas, water activities, bars, and restaurants.  It also connects to Perivolos which has lots of nightclubs, taverns, and restaurants.

The ancient village of Akrotiri is actually an archaeological site.

It’s  Minoan Bronze Age settlement that was covered in volcanic ash during the Theran Eruption around 1627 B. C.  Because it was covered by ash it is very well preserved.

There is a modern village of Akrotiri but there’s not much to see.  You can however wander around and from the top of the modern village you can get a view of the volcano’s caldera and the island’s fields of grapes.

Looking for more things to do in Santorini?  Check out my post Santorini with Kids for more fun ideas!

Ready to plan your romantic Greek vacation?  Let Savvy Nana Travel help you plan your next vacation.  We specialize in custom itineraries for honeymoon couples, families, and groups.  If you can dream it, we can plan it!