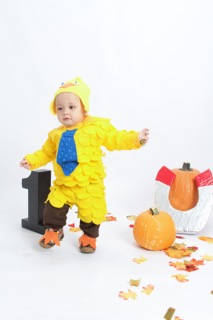 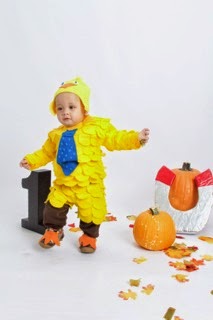 Halloween is next month and my youngest daughter is again looking for the “winner” costume.  She has been trying to win a costume contest for years.

When she was single she dressed our poor Doberman, Portia, in all sorts of doggy costumes from Wonder Woman to a Roman Chariot paired with my grandson, her nephew, in a Roman Gladiator outfit.

A few years ago  she dressed my 1 month old grandson in 2 different costumes, a lion bunting and a skeleton.  Alas all her creative efforts have not garnered any costume prizes.  She decided it was time for a DIY Toddler Costume !

A couple of years ago in pursuit of that much coveted prize she sent me images of creative costumes for her now toddler son asking which of them I wanted to make for him.  After much discussion we decided on a chick costume which would be paired with a magnet attached to his stroller thus making him a “chick magnate”.  She had found a feathered chick costume online for $89+, way too much in our opinion.  We agreed to DIY a chick costume.  My contribution would be the chick costume, she and her husband would deck out the stroller.

We ruled out feathered costumes basically due to my grandson’s allergies, not to mention the mess my cat would make while I was working on the costume.  In the end we decided I would try making it out of felt.

I used materials  purchased at Walmart and ended up with this really cute costume.  It took me about 6 hours to make, I think I could have cut the time considerably had I been able to find a hoodie and eliminated the need to crochet the chick hat, but we think the crocheted hat makes the costume much cuter and he can wear the hat even after Halloween.  In the end the whole costume cost less than $20. 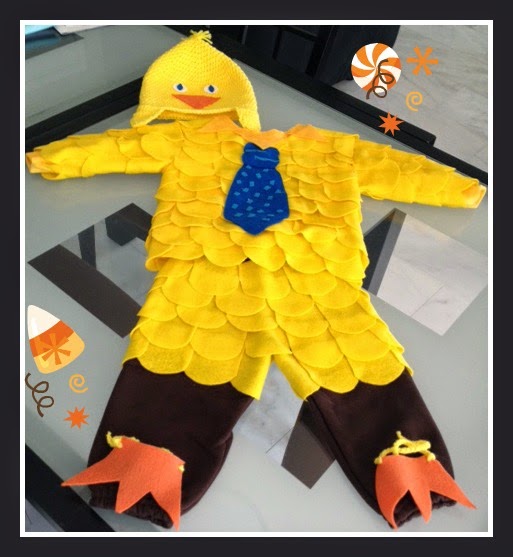 The directions are for size 12 months.  You will need to alter it for smaller or larger costumes.

Make a template for the “feathers” using any cardboard.  It should be 3″ long and 2 1/2″ wide.  The bottem needs to curve.  Use the template to cut out 200 pieces of felt – you won’t use it all but you need the extra for mistakes.

Starting at the bottom edge of the sweat shirt glue a felt feather just above the band making sure the felt hangs past the shirt bottom but is not glued to the band itself.  Glue the straight edge, the sides and 1/2″ from the curved part.

Continue attaching felt in layers making sure the felt is staggered so that the seams do not line up.  Work in rows in rounds from back to front.  Glue one felt piece at the seams folding it to attache to both front and back.  Top rows need to overlap about half way down the rows below them.  Continue until you reach the neckline. You will have to trim felt pieces to follow the curve of the armholes, attache as close to the seam as possible but do not glue over the seam.  At the neckline you will have to trim the straight part of the felt to follow the curve on the neck band.  Glue those pieces just below the band (you will need that band to stretch so the child can slip it over his head).  End layers at the shoulders.  You will have a seam at the shoulders, leave it for now.

Once you’ve finished the body do the same to both sleeves.  Start just above the wrist bands and work in layers around each sleeve.  You will have to trim pieces around the arm seams.  Attach felt as close to the seam as possible without attaching to the seam.

Attach felt to cover each shoulder seam.  These pieces should cover the shoulder seam and hang just a bit over the arms.

Cut 6 pieces of  3″ long triangles out of the light orange felt. Attach triangles to the neck band.  3 in front, 3 in back.

Cut out a tie from the dark blue felt.  The size is up to you ( mine was long because I had to cover the print on the sweatshirt that showed thru the felt.)
Attach tie to front of costume under the middle orange triangle.
Decorate the tie with dots or strips of light blue felt glued on.

Attach felt pieces to the sweatpants.  Start at the crotch.  Work layers in rounds around each pant leg.  Attach the same as the shirt up to the elastic waist. Your chick suit is done, now on to the chick hat. 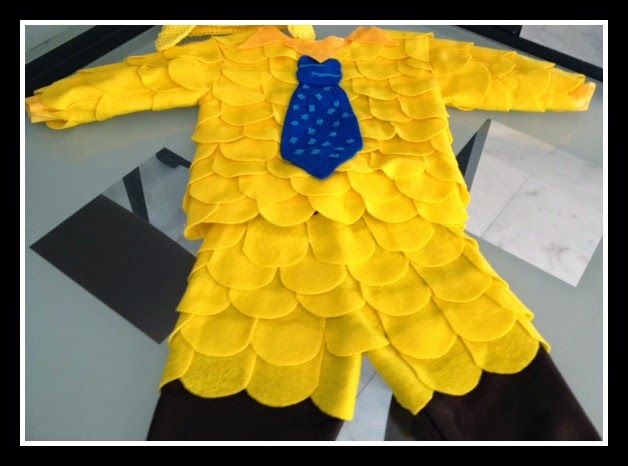 Chick Hat:
To make the chick hat I used the free pattern I found on Crochet Addict.  http://www.crochetaddictuk.com/2014/02/free-crochet-pattern-chick-earflap-hat.html

The instructions are easy to follow and have different sizes.  The instructions include crochet eyes and beak.  I did not make those opting instead to glue on felt pieces. 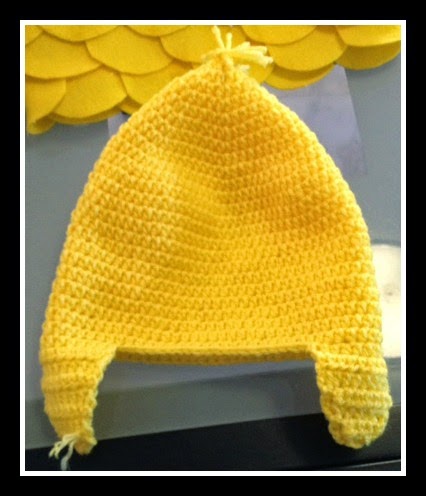 Make the hat as directed on Crochet Addict, you can use the crochet eyes and beak or use felt.  If using felt cut 2 white felt circles, 2 dark blue felt diamonds.  Glue diamonds to middle of white circles.  Glue eyes to hat.  Cut 1 dark orange triangle, glue to hat below eyes. 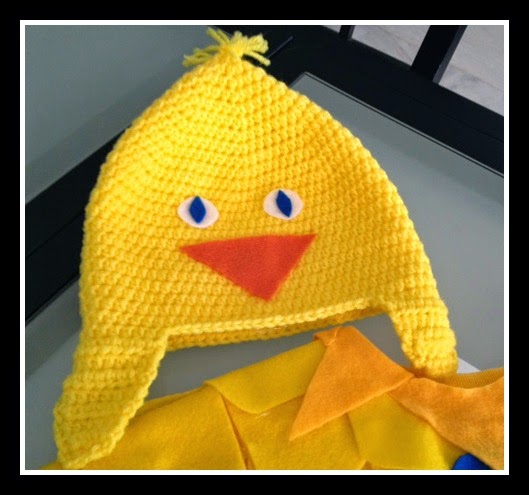 Cut 2 “feet” from the dark orange felt.  Cut 2 small slits to either side of top of each foot.  Chain 12 and attach to foot thru the slit.  Do this 3 more times to the remaining slits.  Chain lengths will tie around child’s ankles to cover his shoes. 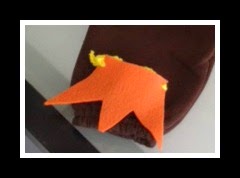 Add a magnet made of styrofoam and foil.

Your costume is done!  Have a safe and happy Halloween!

Check out my Etsy shop for fun handmade hats and more!