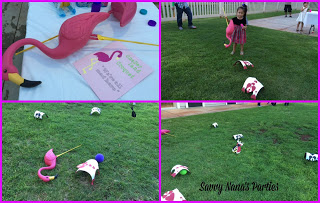 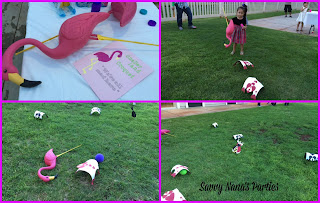 We recently hosted a “Onederland” party for my twin grandchildren’s first birthday party.  One of the fun activities was the themed croquet field we set up on the side lawn of our neighborhood rec center.

Guests young and old got a kick out of it!

The party theme was a take off on the children’s classic “Alice in Wonderland”.  The Queen of Hearts croquet field is a beloved highlight, we just had to have one at our party.

We had pink flamingo croquet mallets and playing card soldier wickets, and a Queen of Hearts goal post.  All of our equipment was homemade, it was very inexpensive to to.  Here’s how to make your own Queen of Hearts croquet set. 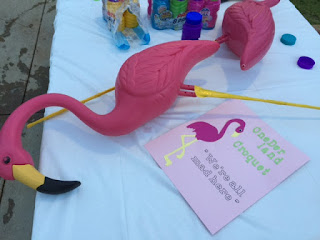 To make the mallets we used plastic pink flamingo lawn statues (affiliate link) I got from Walmart’s garden department last spring.  You can get them from Amazon as well.

We used yellow duct tape to tape the two wire stakes together to form the stick part of the mallet.  Be sure you cover the sharp ends of the stakes with a thick layer of duct tape to avoid cuts.

To make the wickets I used my Cricut Explore to cut out 3 red and 3 black  card stock forms to be the back soldier backings.  If you don’t have a cutting machine just cut out  a foot long rectangle from cardstock, cut half circles from both ends  – these will be the arms and legs of the soldiers.

Glue thin floral wire onto each of  the black or red backing form.

Glue a white cut out forms on to each colored backing. 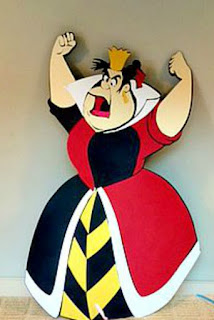 I used the Cricut to cut out this foot high Queen of Hearts, but you can just print out your favorite picture on cardstock and glue it on to a floral wire. 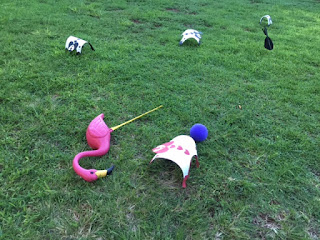 To set up your croquet field stick the wires on the card soldiers into the ground to form a semi-circle.  Soldiers will look like they are doing back bends.

Set up 3 black cards on one side of the field, and 3 red cards on the other side.

Place the Queen in the middle.

Use 2 different color nerf balls for your game.

The game is played by 2 players or two teams, black and red.  Each player or team member must hit their ball thru the wickets in order using the mallet then hit it to the Queen peg.  The first person or team to get it to the peg wins.