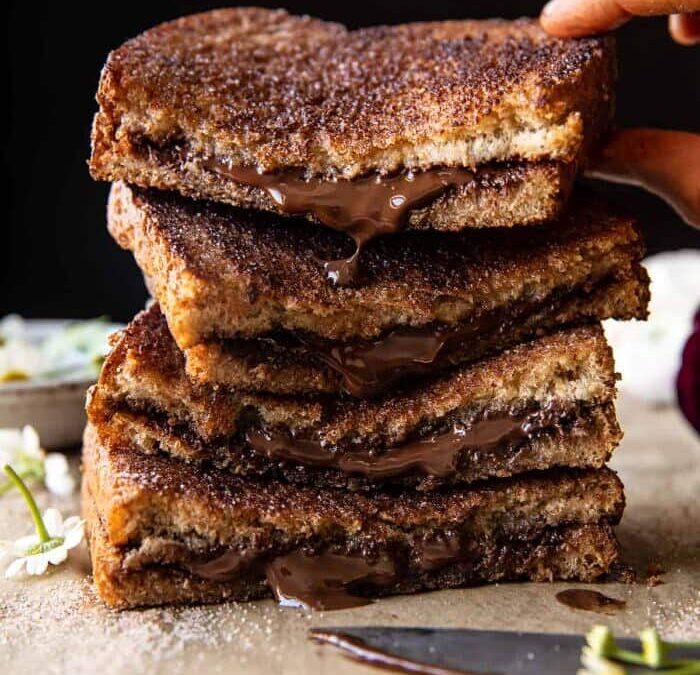 Chocolate Cinnamon Sugar Toast…the quick fix dessert we’re all in need of from time to time. Made using a good amount of cinnamon, a touch of sugar, and a bit of chocolate, for an extra special cinnamon sugar toast. It’s beyond delicious and the easiest to make. Every toasted sandwich is soft, buttery, and full of melted chocolate inside, and crisp and caramelized edges on the outside…with just the right amount of cinnamon sugar. ‘Tis heavenly.

Do you remember all those times the last few weeks that I said I was really into “old-school” or retro-style recipes? Well, this might just be my favorite yet. And it’s not that this is really “old-school”, but man these sandwiches remind me of being a kid in Cleveland.

A good Saturday morning meant dad was making his cinnamon sugar toast, which yes was just cinnamon, sugar, and toast…but with a good amount of butter. My dad’s cinnamon toast was my absolute favorite. Sure, I might be remembering it better than it was, but does it matter. It was delicious, and my favorite thing to wake up to come Saturday morning. I would imagine a lot of you can probably relate?

Cinnamon toast is such a classic. It’s one of those childhood comfort foods I will never stop loving…which brings me today. 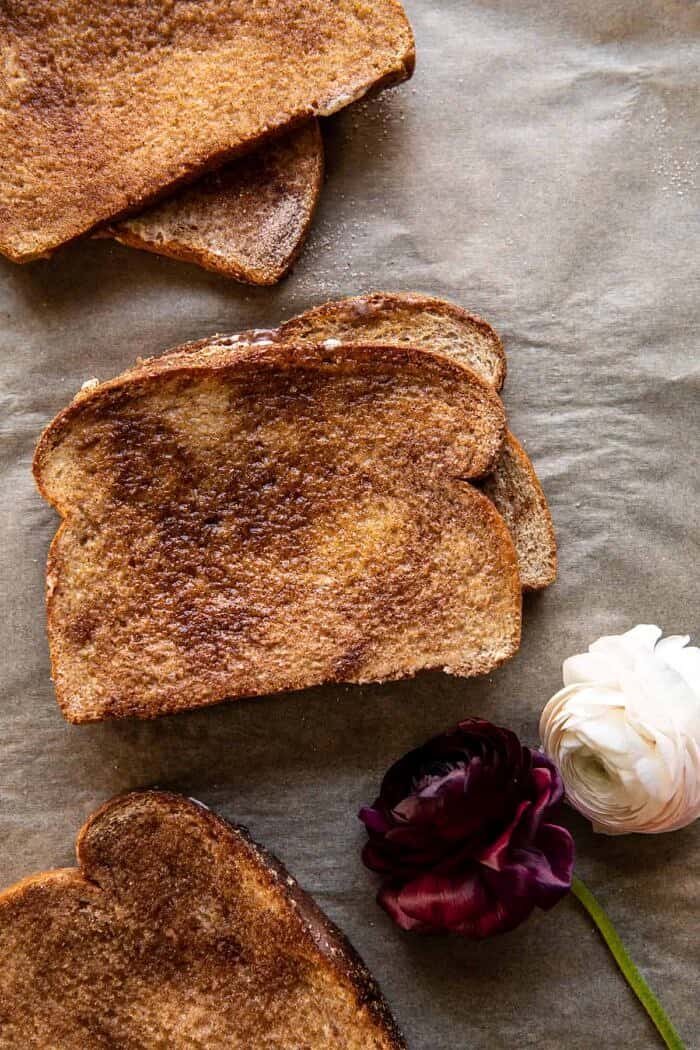 Honestly, this sandwich requires no recipe, but then it does. Because while it’s just four ingredients, it really is one of the best things you can make this week. So I wanted to be sure to bring it to everyone’s attention.

I first started making this years ago…after not the best day, and I’ve continued to make them all these years later. 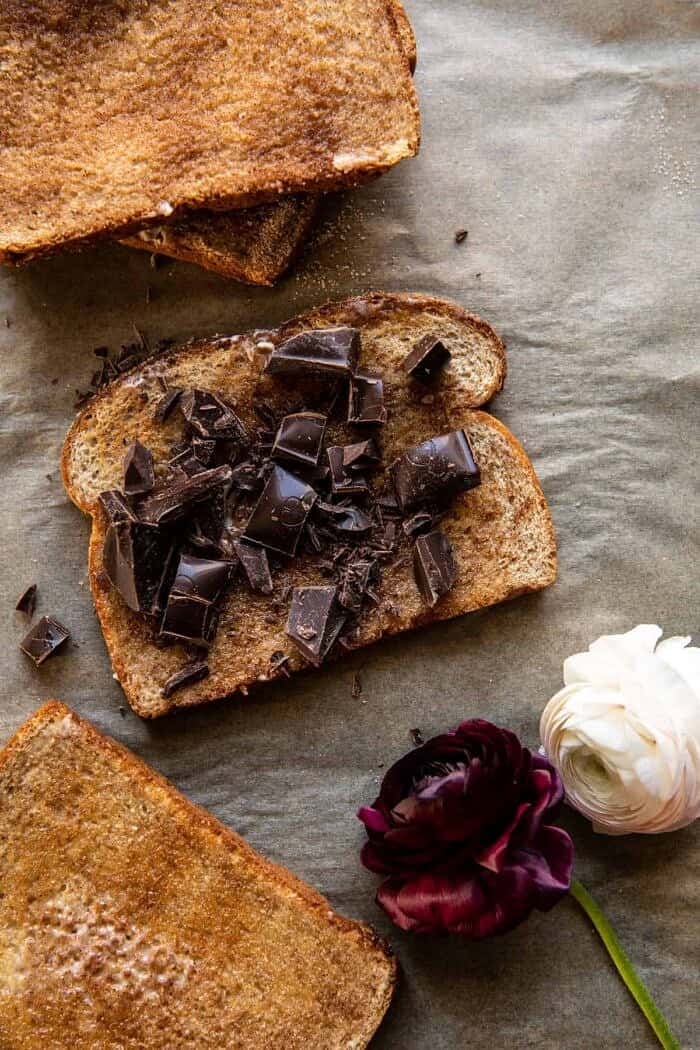 My dad made his cinnamon toast simply with soft whole grain bread, butter, and homemade cinnamon sugar…which yes, is just cinnamon and sugar mixed together. The key was the soft bread. He used good ole’ whole wheat bread, the kind your mom would make you peanut butter and jelly sandwiches on. It’s got to be soft.

And then, of course, butter – and lots of it, coupled with plenty of cinnamon sugar. Dad made his best pieces of cinnamon toast with just a smidge too much butter. The butter would stay in a puddle with the cinnamon sugar on top? Oh my gosh, it made for the best bite of toast.

So, I took my dad’s exact idea for cinnamon toast and I made a chocolate sandwich out of it. My only addition? Chocolate. Right there in the center.

And you know something, I know it’s simple, and I know this concept is not overly creative, but something about this recipe is just so special. And SO DELICIOUS. 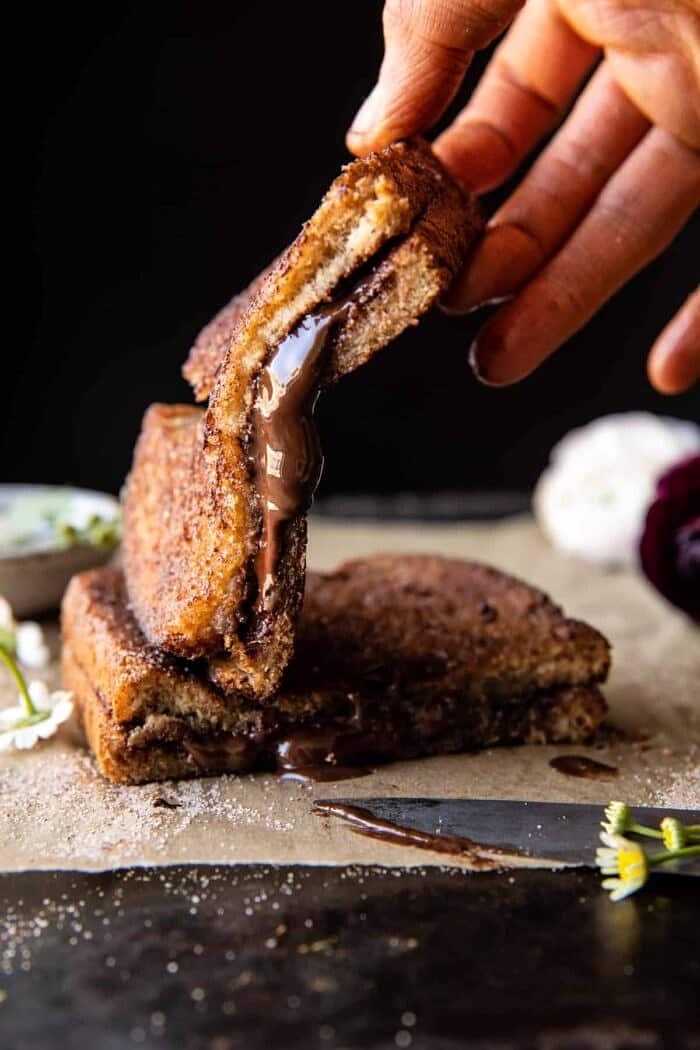 The outside edges of the bread caramelize in the skillet, but the middle stays soft and buttery. Then, all the chocolate in the center of each sandwich melts into a puddle of molten chocolate goodness.

It is every bit as delicious as it sounds. A really great treat that can be made in just minutes. And at any time of day…breakfast, lunch, after dinner, and definitely late night. It’s always good…and I will not lie, an extra dusting of cinnamon sugar will make everything even better.

So what do you guys think? A little 5 minute Tuesday treat? Yep, it’s a good idea! 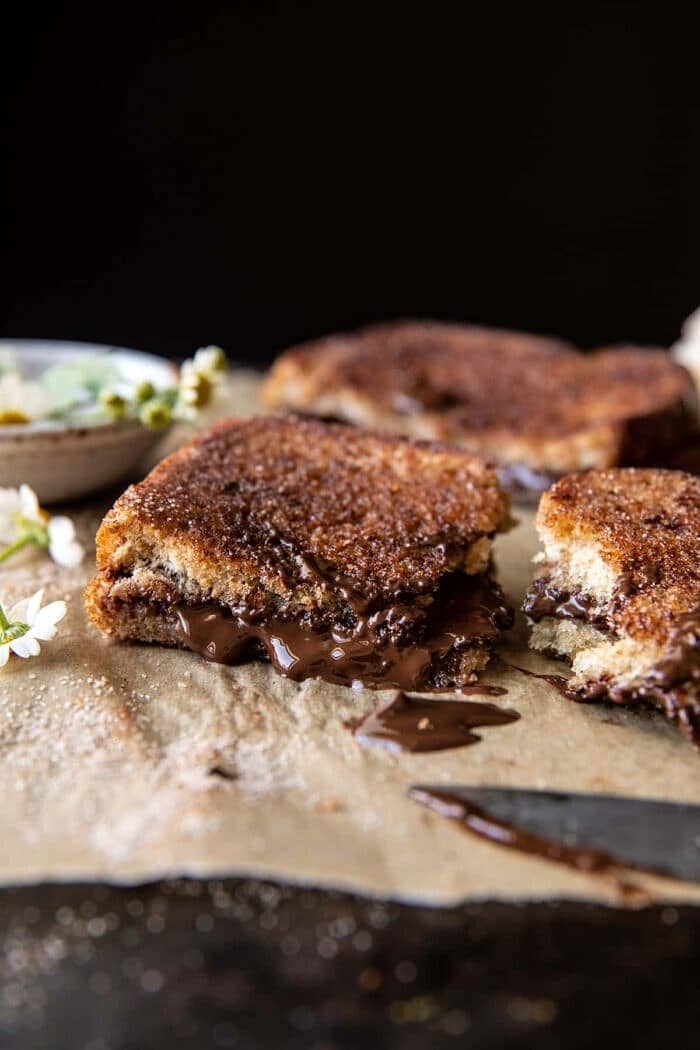 Lastly, if you make this 5 Minute Chocolate Cinnamon Sugar Toast be sure to leave a comment and/or give this recipe a rating! Above all, I love to hear from you guys and always do my best to respond to each and every comment. And of course, if you do make this recipe, don’t forget to tag me on Instagram! Looking through the photos of recipes you all have made is my favorite!

1. Combine the sugar and cinnamon in a bowl.

2. Gently toast each slice of bread in the toaster until warm. Butter the outside of each slice, then sprinkle with cinnamon sugar (you will not need all the sugar). Sandwich the chocolate between the 2 slices, cinnamon sugar sides facing out.

3. Heat a skillet over medium heat. Cook the sandwich 1-2 minutes per side, until the chocolate has melted. Eat warm…and enjoy!