5 More Must See Italian Towns Off The Beaten Path 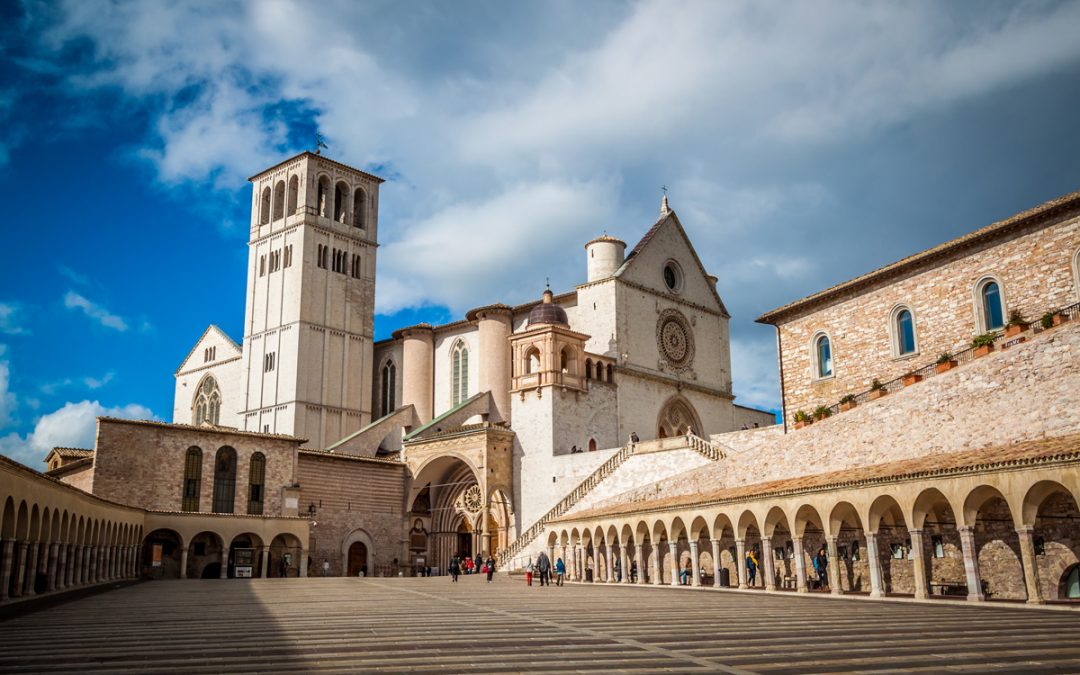 These 5 must see Italian towns may not be home to works by the Masters, boast huge cathedrals, or have major archaeological excavations,  but each of them have a charm of their own.  Many are home to some fine churches with beautiful works of art and some interesting ancient sites.  And of course they all have charming piazzas and cobble stone alleys just waiting to be explored.  Best of all you might be lucky enough to find that you have the place almost to yourself, at least you don’t have to worry about inattentive or rude tourists shoving you out of the way or photo bombing your pictures! Assisi is a must see Italian town in the province of Perugia in Italy’s Umbria region.  Though not quite off the beaten path, it is after all easily accessible by local trains and buses, it is a town rich in religious, historical, and archaeological sites.

Assisi is most famous for being the birthplace of St. Francis of Assisi who was born in this town in 1182.  He founded the Franciscans in 1209 which are a related group of mendicant religious orders with in the Catholic Church.  The Sister of St. Claire are part of this order as Francis and Claire were contemporaries in Assisi and both were dedicated to prayer and ministry of the poor, the sick, and animals.  And yes, St. Francis of Assisi is the Patron Saint of Italy as well as the Patron Saint of Animals, Merchants (he was a fabric merchant before he founded his order), and Ecologists (because of his great love of nature).

Today the Basilica of St Francis is a huge complex built to follow the slope of the mountain side.  The lower basilica houses the tomb of St. Francis.  Facing this basilica on the other side of the town is the Basilica of St. Claire and is where St. Claire is entombed beneath the main altar.

Assisi is also home to the ruins of a first century Roman amphitheater.  It has seen its share of war and blood shed throughout the ages having been sacked by the Ostogoths in the 4th. century, conquered by Fredrick I (Barbarossa)  in the 12th. century, and sacked again by Napoleon.  It also played a heroic role during WWII when the city gave asylum to persecuted refugees, mainly Jews whom the locals hid in convents dressed as nuns and friars.  Many were provided with false documents. Assisi became one of the main centers for the Italian Resistance movement.  Such generosity and heroism earned the city a gold medal for civilian honor.

Assisi’s winding streets are filled with shops selling local crafts and religious artifacts.  It is a popular pilgrimage destination and is filled with devout pilgrims on Sundays and the feast days of the Saints.  So unless you are on a pilgrimage it’s probably not a great idea to visit town on those days.  A weekday visit is much less crowded and you have the town almost to yourself!

Getting to Assisi is fairly easy.  You can get there by train, bus, or private car, and of course you can take a day tour from Rome or Florence.  To get there by train take the train heading to Cortona, get off at Terontola and transfer to a local train to Assisi.  Get off at the main station which is located in the valley and take a taxi or bus up to the town on the mountain.  Of course you could also hike up and pass the areas on the mountains where St. Francis spent time in prayer and contemplation.

Tarquinia is a must see Italian town located in the Northern Lazio region.

Ancient Tarxuna, as Tarquinia was known is one of the 12 Etruscan cities.  The Etruscans were Italy’s first known civilizations settling in what is now Tuscany, Umbria, and Lazio.  Ancient Tarquinia was one of Eturuia’s most important cities and today is probably the best place to see Etruscan Tombs.  The town and it’s ancient Necropolis is one of central Italy’s UNESCO World Heritage Sites.

The town is also home to one of the best museums of Etruscan finds outside of Rome.  There you’ll find these fabulous terracotta winged horses that date from the 4th. century BC.  You’ll also see Etruscan sarcophagi and statues as well as clay vessels and intricate funerary gold jewelry.  The archaeological museum is housed in the Palazzo Vitelleschi on Piazza Cavor  the town’s medieval center. The town’s Cathedral boasts good frescoes dating back to 1508 and other interesting churches.

But the town’s real attraction are the Etruscan tombs in the Necropolis.  There are about 6000 tombs dug into the soft tufa dating back from the 6th. to 2nd. Centuries BC.  The tombs are decorated with beautiful frescoes which still look vivid even today.

The Necropolis is located just outside of the town wall.  There is a free bus that run from town to all the sites including the tombs but it’s a nice walk through the town and up to the tombs.

If you wish to visit both the tombs and the museum there’s a combination ticket which allows entrance to both.  I would recommend having a look at the tombs first, there are about 15 or so open each day.  Each tomb is from a different period allowing one to see the different styles thru the ages.  The tombs are protected by these concrete “houses” and you’ll have to walk down some stairs to view the frescoes, definitely worth looking at several at least.  After the Necropolis you can head back to town and make your way to the museum to see some of the artifacts found in the tombs.  Then you can wander thru the medieval streets or have a snack at the piazza.  One of my favorite treats is the ricotta pizza you can find at the local pizzaria!

Getting to Tarquinia is very easy.  From Rome take the train to Tarquinia, it’s about a 1 1/2 to 2 hour ride.  From the station take the bus to the town center.  If you’re on a cruise ship that’s docked in Civitavecchia you can take the Cortal (Blue bus) from Piazza Vittorio and get dropped off by the Tarquinia InfoPoint.  The ride is about 25 minutes.

Bracciano is a small town in the Lazio region.  It is situated above the volcanic lake from whence it’s named.  Lago di Bracciano is the 2nd. largest lake in the region and the 8th. largest in the country.

One can canoe, swim, sail, and even dive in the lake specially during the hot summer months.  The town above offers beautiful views of the lake below.

But it’s real claim to fame is the very well preserved medieval castle called Castello Orsini-Odescalchi which dominates the hilltop town.  This castle was also the venue for Tom Cruise’s wedding to Katie Holmes.

You can take a tour of the castle, it’s huge and very cool!  After you can wander the streets of the old town and stop at one of its fine restaurants for a meal.  In the summer you can camp down by the lake and lounge on the beach or swim, sail, or canoe.  There’s also a ferry that will connect Bracciano to the other 2 towns on the lake. 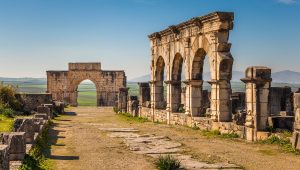 The modern town of Ostia is basically a suburb of Rome.  There’s not a whole lot to see and do in the actual town itself.  The main attraction of this town is it’s vast archaeological site called Ostia Antica.

Back in the day it was a very important city because it was Rome’s ancient seaport.  The sea has long receded and it’s no longer a coastal city, but the Archaeological site is fairly well preserved and offers a glimpse at how it was when it was a bustling seaport with over 60,000 residents.

To get to there make your way to the Ostiense Train station or the Piramide Metro (the lines are intertwined here).  Walk over to the Lido line – it uses a metro ticket or pass – and hop on a train.  Get off at the 7th. Stop – Ostia Antica.  From the station walk over the bridge and follow the street to the park entrance.

Buy your ticket at the kiosk before the gate. 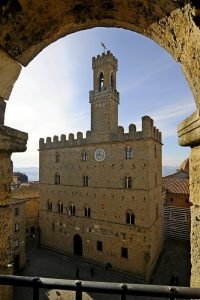 Volterra is a walled mountaintop town in Italy’s Tuscany region.  It’s history dates back from the 7th. century BC and has many structures from the Etruscan, Roman, and medieval periods.

It was one of the 12 cities of the Etruscan League and was a very important center in those days.  After the Etruscan era the city became allied to ancient Rome then by the end of the 3rd. Century BC.  In the 5th. Century it was a bishop’s residence the by the 12th. Century was conquered by Florence and fell under Florentine rule.  When Florence fell in 1530 it ended up in the control of the Medici family then from there followed the history of the Grand Duchy of Tuscany.

In pop culture it was an important part of the popular Twilight series written by Stephanie Meyer.  In this series Volterra was home to the Volturi, a group of powerful ancient vampires who essentially ruled over all the vampires in the world.

There are many interesting sites to in Volterra including the remains of a Roman Theater, Volterra Cathedral, the main piazza, museums which house works of Tuscan artists and ancient Etruscan funeral urns and other artifacts.  And of course there are the city walls and some very well preserved gates.

Volterra is definitely one of the must see Italian towns which is not on the regular tourist agenda, and that’s a good thing.  Because it’s not on the regular tourist route it’s not at all crowded.  It’s a great town to visit to experience the authentic Tuscany.  But it’s a bit hard to get to.  The easiest way to get to Volterra is by car or if you don’t want to drive or hire a service by tour bus. If you want to get there via public transportation it’s doable, but not so easily done.

Getting there by public transportation involves a couple of train or bus transfer.  You can get there from any of the main Tuscan towns like Florence, Siena, Pisa, or Livorno.  The closest train station to Volterra is Saline di Volterra which can be reached by only by the line running from the coastal town of Cecina.  So from any Tuscan city take the train to Cecina where you can transfer to the coastal line, but be aware that train service is intermittent.  So most folks take the train to Cecina then transfer to a bus to Volterra.

So there you have it; 5 more must see Italian towns that are a bit off the beaten path.  A day trip to any or all of these towns will give you a taste of the real Italy!