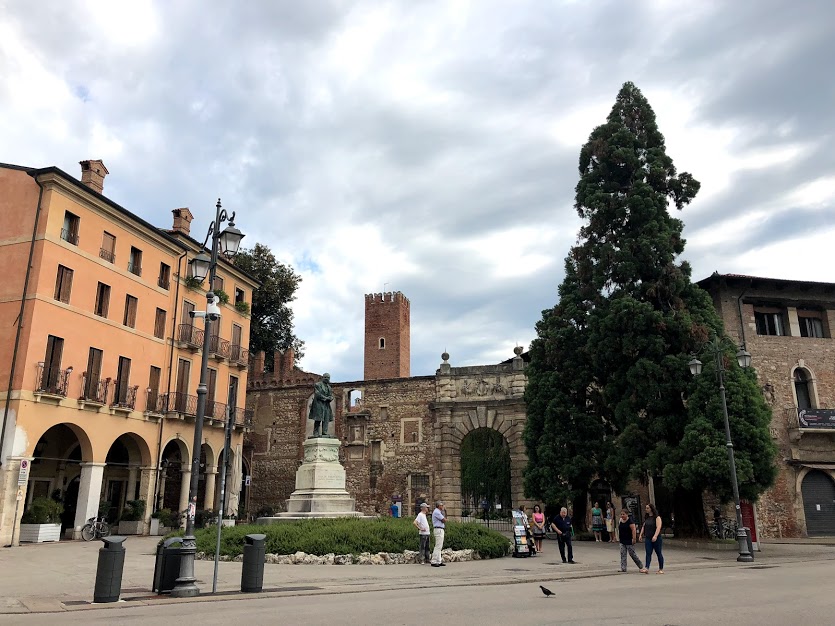 City of Vicenza as seen from the Monte Berico viewpoint

Vicenza is a city in Northern Italy’s Veneto region.  It is located 43 miles from Venice (a 45 minute train ride away), 38 miles from Verona, and 22 miles from Padua; making it an easy day trip from any of these other famous Veneto cities.

Vicenza is one of the oldest cities in the Veneto.  It is known for its natural beauty and the beautiful villas in and around the city.  The villas were designed by Andrea Palladio a humble stonecutter born in nearby Padua.  Palladio fled an oppressive employer in Padua and ended up in Vicenza where he went on to become a noted 16th. Century architect. Palladio left a legacy of villas, churches, and other building in and around the city.  Because of his contributions the city has been listed as a UNESCO World Heritage Site since 1994.  It is listed as “The City of Vicenza and the Palladian Villas of the Veneto” thus emcompassing all the building within the city center and those around the province of Vicenza. 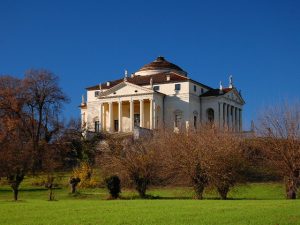 Not only did Palladio design beautiful villas in and around his adoptive city, he transformed European architecture.  Among his admires was Thomas Jefferson who considered Palladio the greatest architect of all time.  Jefferson studied the works of Palladio and considered the architectural book written by him to be the Architectural Bible.  Montecello, Jefferson’s home in Virginia was modeled after Palladio’s “La Rotonda” villa located outside Vicenza’s historic city center.  Many British country homes are also designed in the Palladian style of architecture.

So a visit to Vicenza is really a walk thru Palladio’s City.  Many of his works are in the city’s centro storico.

If you’re not a big fan of Palladian Architecture or architecture in general you don’t have to enter any of the villas or the Palladio Museum, but you can certainly stroll thru town and admire the classical styled building built by the great man.

Here are a few things to see and do in Vicenza:

Inspired by Roman amphitheaters Palladio started this Renaissance marvel in 1580, after his death it was completed by Vincenzo Scamozzi.  Beyond the walled garden lies an elliptical theater with a stage set modeled after the ancient Greek city of Thebes.

You can buy an entrance ticket at the box office located on the right side of the arched stone entrance to have a tour of the building and the stage.  Tickets are €11.

Or you can admire the statues of actors scattered around the garden.  The garden is free to enter.

On hot summer days the garden is a nice place to cool off and rest after walking around Vicenza.  I like to grab a cold drink, like a granita, from one of the bars just outside the gate and sit quietly on a stone bench in the garden.

The theater is still used for operas and classical and jazz  performances.  Italian performers vie for a chance to perform on the amazing stage.

Today the headquarters of Banca Popolare di Vicenza Palazzo Thiene was purchased by the bank from the Thiene family in 1872.

This palazzo is now home to fine paintings and statues.  It also houses the world’s largest collections of oselle.  Oselle are silver and gold coins once minted by the Venetian Doges to gift to all the noble families of Venice at Christmas.

A visit to this palazzo is by appointment only.

This Basilica located in Piazza dei Signori the town’s main square is now a venue for world class temporary exhibits and is the home to the Museo del Gioiello which houses a dazzling collection of historic and contemporary jewelry.

The building is modeled after a Roman basilica.  It once housed the courts and Council of Four Hundred. Palladio was commissioned to restyle the old palazzo in 1549.  It is capped by a huge copper dome that looks like an upturned ship hull.

During spring and summer you can climb up to the roof  and walk around.  The roof has a commanding view of Vicenza’s centro storico.

Designed in 1550 this palazzo is one of Palladio’s finest buildings.  Located diagonally across from the Teatro Olimpico the palazzo is home to Vicenza’s Civic Art Museum.

On the ground floor which is used for temporary exhibits you’ll find the amazing ceiling fresco of Diana and Helios by Domenico Brusasorci.

The upstairs galleries include works by Anthony Van Dyke and Alessandro Maganza as well as the private collection of Guiseppe Roi with drawings by Tiepolo and Picasso.

Admission to the museum is €7.

Dominating the Piazza del Duomo is Vicenza’s Cathedral.  Designed by Lorenzo di Bologna construction began in the late 15th. century.  Palladio added his own touches to the unfinished building in the 16th. century, notably the dome that was inspired by the

The building was heavily damaged during the bombing in WWII so the building seen today is a 20th. century reconstruction.

Actually you’ll find that the town pretty much turns into a huge open market on those days with vendors and food trucks setting up along the streets and the piazzas.

This 13th. century Gothic church was built by the Franciscans.  It’s best feature is the marble entrance.  It’s pretty spartan inside.

But it has a splash fountain nearby for kids to play in during hot summer months and on Tuesdays and Thursdays the square hosts an open market where you can buy fruits and veggies as well as dairy products and fried seafood.

Market days in Vicenza are normally Tuesdays and Thursdays.  Food vendors set up stalls in front of the Chiesa di San Lorenzo and in the Piazza del Duomo.

Clothing and household goods are sold in stalls in and around Piazza dei Signoria and Piazza dei Erbe.  Just walk around the town and you can’t miss one of the markets.

If you’re there during the summer months try some Pesche Saturnine.  These saucer shaped peaches are delicious!

When you’ve had your fill of the Markets or have seen your share of Palladian buildings treat yourself to a cup or cone of Gelato.  You’ll find a gelateria on just about every street, but my favorite is Venchi just down the street from the Coin Department Store.

Gelato not your thing?  Then head over to a Wine Bar or Porseccheria, they’re on every street too!  Try a refreshing Hugo Cocktail, one of my favorites!

Better yet have both!  Well maybe not at the same time, but believe me both are well worth it!

It’s about a 10 minute ride up the hill from the city or you can walk up from Vicenza in about half and hour.  The walk takes you thru a tall staircase and thru a beautiful arcaded walkway.  Free parking can be found in Piazzelle della Vittoria across from the church’s main entrance.

That’s where you’ll find the viewpoint for some awesome views of Vicenza and the surrounding countryside.

Try going up during the day and again at night, it’s two totally different experiences!

These are just a few things to see and do in and around Vicenza.  Believe me if you’re a real Palladio buff there are more villas to see and a Palladio Museum to visit.  But to do all that would require much more than a day.  I’ve been to Vicenza at least 3 times and have stayed for a month at a time and I still haven’t seen everything!

Of course we’ve wandered the other nearby towns like Quinto Vincention, Torre de Quatresolo, Camisanno, and more.  Believe me there is so much to do in and around the area.  So if you have friends and family stationed at the Casserma Ederly Army Base in Vicenza be sure to visit them and plan to stay for a while!