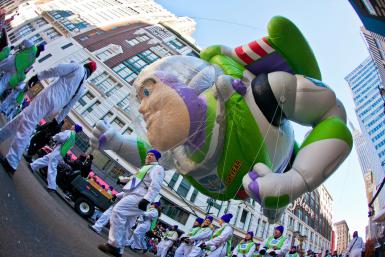 The annual Macy’s Thanksgiving Day Parade heralds in the Christmas Holiday season.  It’s one of the most famous holiday events in the world. Over three million people line the parade route to get a glimpse of celebrities, marching bands, floats,  and the huge floating balloons—Snoopy, Spiderman, Big Bird, Hello Kitty,  and friends.  50 million people are expected to watch it on TV as part of their annual Thanksgiving tradition.

This parade has been a part of my life forever.  I watched is as a child perched high atop my father’s
shoulders.  When we relocated to Hawaii we woke up early Thanksgiving morning to watch it on TV, when I had my own kids we did the same, and now the grand kids watch it every year.  When my youngest child was in her high school’s marching band they marched in this parade.  At that time Pearl City High School had a standing invitation to march in the parade every couple of years, they still may.  This parade is definitely part of our family’s Thanksgiving tradition.  It wouldn’t be Thanksgiving if we miss the parade, live or on TV.

For those of you who will be lucky enough to watch it live this year here are a few tips to help you out.

This Thanksgiving eve event is on November 26, 2014 beginning at 3:00 p.m.  It takes place
along the perimeter of the Museum of Natural History, on 77th and 81st streets between Central Park West and Columbus Avenue.

The parade route starts by  heading south down Central Park West from 77th Street, east along Central Park South to Sixth Avenue and then south along Sixth Avenue to West 34th Street.  It ends in front of Macy’s in Herald Square.

3.  Arrive early and bring folding chairs, they will make the wait more comfy.   Crowds start gathering along the route as early as 6am. You’ll want to stake out your spot before 7am if you want the kids to be close enough to be able to see.

4.  Check the weather and dress accordingly.  From the time you stake out your spot until the last float passes by you could be standing out in cold weather for more than 5 hours.  Make sure the kids are dressed warmly and have hats and mittens.  Layering would be a good idea, you can peel them off if it gets warmer as the day wears on.  Bring umbrellas if there is a chance of rain or snow.

5.  Bring essentials such as snacks, camera, extra sweater, a lap blanket may come in handy.  I’d take it easy on drinks, hot or cold, bathrooms may be difficult to get to.

6.  Choose your spot wisely, a spot as far north as possible would be good.  Once the parade starts it takes 90 minutes for the last float to pass by.  If you’re near the beginning of the route you could be done before 11:00 a.m.  If you choose a spot near the end near Macy’s Herald Square you will be waiting much longer and be fighting larger crowds.

It would be a good idea to stake your spot near a coffee shop or department store, this is a definite must with young kids, you can nip into the shop for a bathroom break when needed.

7.  Know your kids limits.  There’s no harm in bailing out early if it gets too cold or the kids get cranky.  Watching part of the parade is better than nothing, and better than bringing home sick or upset kids.

8.  Treat yourselves to a Thanksgiving Feast, after standing out in the cold for hours you’ve definitely earned it.  For NYC restaurants offering special Thanksgiving meals click here!

9.  Enjoy the other sights and events this city has to offer.  The Christmas Season is one of the most wonderful time of the year to visit the Big Apple.  For a list of NYC Christmas events click here!