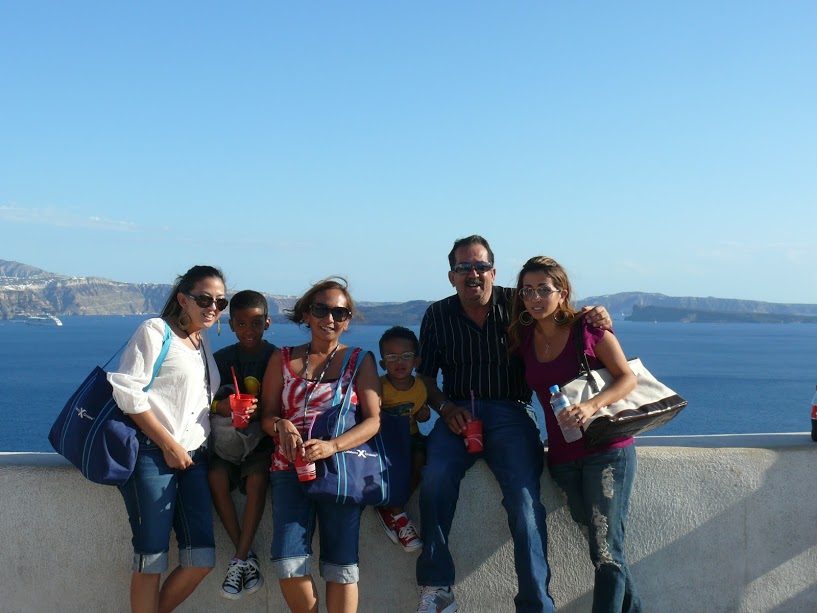 Ah, Santorini!  This Greek island is part of the Cyclades group of islands in the Aegean Sea.

The mere mention of Santorini inspires visions of white-washed homes in quaint villages, iconic blue domed churches, ocean views, and fabulous sunsets. Santorini has all the ingredients for a romantic get-away for two.  It’s no wonder that it’s a favorite wedding and honeymoon destination.

But what if a family with young kids or teens?  Does Santorini have anything to offer you?  Of course it does!  I have to admit we’ve never actually stayed in Santorini, but our family’s been there many times.  It’s a popular port of call for many of the cruise ships that sail the Mediterranean route.  And cruising is definitely our family’s favorite vacation, and Med cruises are our first choice!

We’ve been to Santorini many times with the kids and grandkids.  We’ve always found something fun for them to do.  The first time we took our grandson Jett to the island he was only 10 months old.  I doubt he’ll remember it, but I know he loved the donkey ride to Fira, the main town.  And Devon, who was 3 when we first took him to Santorini still talks about his first donkey ride up to town.  Our kids and grandkids all love Santorini!

So whether you’re staying on the island for a few days or spending just a day here are 6 fun activities for your family!

Red Beach in the afternoon

Santorini is an island so the most family friendly activity would be a day at the beach.  I mean everyone loves the beach right?

There are many beautiful beaches on the island, pretty much all easily accessible on public transportation, but if you’ve got kids you’ll want to stick to the “family beaches”, meaning beaches where nudity is not allowed.

Red Beach, Kamari, Perissa, Agios Georgios, and Perivolos are the most popular family friendly beaches on the island.  All are considered “partly organized”, that means there are lounges and umbrellas for rent and most likely bars and restaurants (which will allow you to use restrooms), and some have watersport rentals as well.  These beaches are within 10-12 Km.  from the main town of Fira and are easily accessible by public and private transportation.  There are also nearby hotels if you plan on staying on the island for some time.

If you’re tired of the beach there’s a small waterpark in Perissa.  Now when I say small, I mean small.  Don’t expect the thrill rides of Atlantis or Wet n’ Wild!  They’ve got a few slides and a splash zone, for adults there are loungers and umbrellas, and of course a bar.

But it’s a great way to spend a hot summer day for a very good price.  Admission is €6 for adults and €3 for kids.  The restaurant serves good food at reasonable prices (€10-12 per meal). 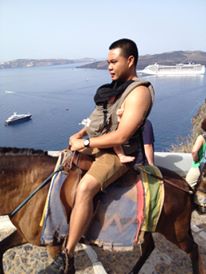 Go on a donkey ride!  There are only 3 ways to get from the port where cruise ships tenders dock to the town of Fira: Walk up the 600 steps that zigzag up the 800 ft. cliff face, take the cable car, or ride up donkey up those same steps!

I know riding the donkey is controversial and frowned upon by the cruise lines.  I’ve heard many folks grumble about animal cruelty, hey I love animals too!  But the donkeys don’t seem to be poorly treated, their owners seem to take good care of them, they are after all a money making enterprise.

All that aside I have to admit we ride them up to Fira all the time.  The kids actually look forward to riding them.  As for me, I ride them because the alternatives aren’t much better.  Cable car lines can be 2 to 3 hours long depending on how many cruise ships are anchored off Santorini.  And walking up those steps along side the donkeys as  you side step their droppings is not my cup of tea.  So a donkey ride up it is!

Rides cost €5 each way, kids are free and must ride with an adult.  As I’ve said Joel took Jett up on donkeyback when he was just 10 months old!  There they are, Jett’s in the Ergo!  Dion and Devon ride with one of us.  Dion’s been trying to get his own donkey, but the man won’t let him and neither will we!

But I do not recommend riding the donkey down from town.  I did it once and will never do it again!  I made it down safely, but it was a harrowing ride, took 3 drinks before I could stop shaking!

Go ahead ride the donkey, it’s part of the Santorini experience!

Take the bus to Oia Village on the north end of the island!

Oia is probably the most famous village on the island, it’s certainly the most photographed.

It calmer and less crowded than Fira with many shops, galleries, restaurants, and cafes. The kids love wandering the small alleys and peeking into the various shops.  You can grab a cold fruit slushie to cool you off while  you enjoy the fantastic views.

Did I mention the best sunsets are viewed from Oia!

Take a small ship to the center of the caldera and hike up Nea Kameni, a volcanic island that is part of the Santorini group.

Nea Kameni is an uninhabited volcanic island in the middle of Santorini Volcano’s caldera.  It is a protected natural monument and national geological park.

It is an active volcano and you will see fumaroles emitting hot sulfurous gasses as you hike up.  It’s an easy hike, even for small kids. There are fabulous views of Santorini and the other nearby islands.

This area does get quite hot and there is virtually no shade.  The only shade is a bench with a thatched umbrella along the path.  There are no shops or cafes on the island either.  So wear a hat, bring plenty of sunscreen and water, you will need them![spacer height=”-20px”]

Visit the Archaeological Site of Akrotiri.

The town was buried in ash during the volcanic eruption around 1623 B.C. E.  The ash helped preserve the village, much like Pompeii.  Unlike Pompeii there were no human remains found leading one to surmise that the village was abandoned before the eruption.

This site may not be suitable for very young children, unless they’re budding archaeologists.  But it is worth the trip if like us you like to include a bit of education in your vacation.

Admission is €12 for adults, kids up to 18 are free.  It’s easily accessible by public transportation, the bus stop is directly across the street from the main gate.  Bus tickets are €2 each way.  Taxis cost €20 each way.

You’ll need no more than a couple of hours to explore the site and can couple this activity with a trip to Red Beach. Red Beach is a short walk down the street from the main gate (cross the street, there’s a sign a few feet from the bus stop directing you to Red Beach, you can’t miss it).  Don’t worry about walking back to the bus stop after the beach, the bus turns around in the beach parking lot to begin its return trip to Fira.

However long you’re on Santorini and where ever you decide to wander have a great time!  If you find more fun family activities let us know, we’d love to try them next time we’re there!