A chocolate chip cookie, the ultimate comfort food.  Who can resist them? But do you know its history?  Most of us don’t and it’s really quite interesting no matter which version you believe!

For starters the chocolate chip cookie is a true American concoction that came to be quite accidentally when its original baker ran out of Baker’s chocolate, or nuts.  But I’m getting ahead of myself.

Ok back in 1930 a dietician named Ruth Graves Wakefield and her husband Kenneth purchased a Cape Cod style house in Whitman a town between Boston and New Bedford,  Massachusetts.   The house was originally built in 1709 and was used by travelers to rest, change horses, have a meal, and pay any tolls needed to use the road.  Ruth and Kenneth soon turned their home into a lodge which, with a nod to its past, they named “The Toll House Inn”.

Now Ruth was a skilled baker and soon drew in visitors from all over the northeast.  Many came to sample her delicious baked goods.  One of her favorite desserts were Butter Drop Do Cookies and her recipe which dated back to colonial days called for Baker’s chocolate.  So one day in 1937 Ruth was making these Butter Drop Do Cookies and found herself lacking the chocolate, so she chopped up a bar of Nestle’s Semi-Sweet Chocolate into tiny pieces thinking that the chocolate would melt and spread throughout the dough.  When it didn’t the chocolate chip cookie was born!  Well that’s one version; another version is she ran out of nuts and substituted the chopped chocolate; still another version claims she accidentally dropped a bar of chocolate into the dough and it broke into tiny morsels.  Whatever the version it’s all part of chocolate chip cookie history!

The new cookies were a hit and Ruth called them “Toll House Chocolate Crunch Cookies”.  Her recipe was published in news papers all over New England and the sales of Nestle’s Semi-Sweet Chocolate bars rocketed.

Then in 1939 when “Betty Crocker” (she was a fictional character who had a radio show) featured them on her radio series “Famous Foods from Famous Eating Places” the chocolate chip cookie went big time!  Ruth being a shrewd gal approached Nestle’s and struck a deal, they could print her recipe on all their semi-sweet bars and later bags in exchange for a lifetime supply of chocolates.  Lucky lady!

In the 1940’s Ruth sold Nestle’s the name “Toll House” and the cookies were widely known as Toll House Cookies.  Nestle lost the trademarked rights to the name in 1983, Toll House is now legally the generic name for a chocolate chip cookie.

The cookie has become the most popular cookie worldwide and is the official cookie of Massachusetts.  As for Ruth and hubby they sold the Toll House Inn in 1966 and it burned down on New Year’s Eve 1984.

So now you know its history.   I’m sure you also know many versions of the chocolate chip cookie recipe have popped up, you may even have your own, I know I do!  But have you ever tried The Neiman Marcus Chocolate Chip Cookie?  It’s one of our favorites!  You can order it for dessert at their Mariposa Restaurant where you get a boxed set of 3 cookies and a recipe card, very cute!  Or you can buy the giant sized cookie at their Bistro.  And you can also buy tins of them from the Neiman’s gourmet food department at Christmas time.  We do all 3!  A box of 3 from the restaurant costs $6, the giant cookie at the Bistro is $5, and a tin of them will set you back about $20+.

But Neiman’s is nice enough to share their recipe, remember the boxed set at Mariposa comes with a recipe card.  So if you don’t feel like shelling out $5 or more for a cookie or two; or if you’ve never tried the Neiman Marcus Chocolate Chip Cookie then read on because I’m sharing it today! 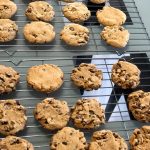