France is one of my favorite countries to visit.  Wine, crepes, fashion, and shopping; what’s not to love? For most of us the mention of France brings Paris to mind.  But there is much more to France than the City of Lights!  Last week I wrote about 4 of my favorite must see French towns.  Well I decided that those four towns though superb aren’t nearly enough!  So this week I’ll write about four more!

Again the must see French towns I’m talking about today barely touch the surface.  But I’ll try to talk about some towns that I think will appeal to different interests.  So whether you’re a history buff, conspiracy theorist, pilgrim, or wine connoisseur I hope one of these towns will spark your imagination!

Chartres is a commune and the capital of the Eure-et-Loire department of France.  It’s located 90 kilometers southwest of Paris and is easily accessible by car and train.

This medieval town is known world wide for it’s beautiful Gothic Cathedral which features a labyrinth.  This cathedral known as the Cathédrale Notre Dame de Chartres (Cathedral of Our Lady of Chartres) is a UNESCO World Heritage Site and is described as “a masterpiece…a high point of French Gothic art.”

The Cathedral we see today was built over the remains of a smaller cathedral that had burned down.  It was mostly constructed between 1194 and 1220.  It is very well preserved with most of its original stain glass windows intact.

Many tourist visit Chartres just to see this beautiful church.  Architectural fans stand in awe at this building.  But it is also a pilgrimage site.

Long before the cathedral was built the city was already an important pilgrimage site where devotees paid homage to early Christian martyrs including Saints Piat, Cheron, and Modesta, whose bodies were believed to have been tossed in the area on the north side of the church now called Puit des Saint-Forts (Well of the Strong Saints).

Chartes is also a church for the veneration of the Virgin Mary.  It is home to the Sancta Camisa, believed to be the tunic worn by the Blessed Mother at the time of Christ’s birth.  Legend has it that this tunic was gifted to the cathedral in 876 by none other than Charlemagne who supposedly got if from Emperor Constatine VI during a crusade in Jerusalem.  This legend has been disproven and it is believed that the gift from Charles the Bald and there is no evidence of its importance prior to the 12th. Century.

The cathedral has also been the setting for many books that claim to explore the mysteries of the cathedral, its symbols, and of course the labyrinth.  So it is a stop for conspiracy theorists as well.

Other than the Cathedral there are museums to visit, markets and fairs to explore, and of course cafes and restaurants to try.

Today Versailles is a wealthy suburb of Paris.  Located in the Île-de-France region 17 kilometers from Paris, Versailles is a major tourist destination known for the Chateau de Versailles and its exquisite gardens and fountains.

The town was founded by Louis XIV and was the de facto capital of France for over a century between 1682 and 1789.  The chateau is steeped in history having been home to French royalty including Louis XVI and his wife Marie Antoinette.

In modern times this UNESCO World Heritage site holds a place in history for being the venue where the Treaty of Paris which ended the American Revolution and the Treaty of Versailles which ended World War I were signed.  Today it is mostly a tourist attraction and is the place where the Congress of France gathers to vote on revisions to the constitution.

The chateau and its surrounding buildings are definitely worth the visit.  It is home to several galleries including the Hall of Mirrors where the Treaty of Versailles was signed, and the coach gallery.  You can also visit the Queen’s Hamlet and the Trianon estates as well as the gardens and fountains of course.

The gardens are amazing and vast.  There are rivers and fountains, statues, and of course trees and flowers.  I find the best way to get around the garden is by renting a golf cart for a couple of hours.  It’s fun and allows you to see more than when you’re on foot. 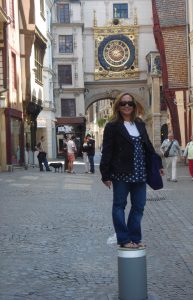 Ruoen is the capital of the Normandy region of France.  It is situated on the River Seine 135 kilometers north of Paris.

It was one of the largest and most prosperous cities of medieval Europe and was the seat of the Exchequer of Normandy during the Middle Ages.  It was also where Joan of Arc was burned at the stake in 1431.

Today a simple field of wild flowers marks the place of her martyrdom and a modern church dedicated to St. Joan d’Arc stands nearby.

I’m sure a visit to this church is a must when in town, but Ruoen’s main claim to fame is it’s majestic Gothic Cathédrale de Ruoen.  This cathedral became Claude Monet’s obsession and inspired him to paint its facade in a series of 30 painting depicting it in all seasons and times.

Le Gros Horloge, the big clock in the center of town is another attraction.  You can climb to the top for some city views.  There are also several art museums, of course they feature Monet’s work, to visit as well as some really great markets.  You can also stop by to see the macabre ornamentations on the building of the Aitre St-Maclou.  This was the site of a mass cemetery during the Black Plague of the Middle Ages then turned into a boys’ school in the 18th. century. 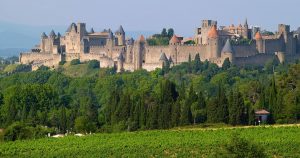 Carcassone is a fortified city in the south of France.  It is located in the Languedoc-Rousillion area of the Occitanie region.

It is known for its double walled city that is a castle.  This UNESCO World Heritage site is a popular tourist destination where one can wander around the enchanting city, walk between the walls, and visit museums,churches, cathedrals, and shops.

Carcassone is located in the middle of what used to be Cathar country.  Cathars were a sect of Christianity who believed that their religion was basically the purest form of Christian religion.  They were strict adherents of the teaching of Jesus Christ and had little faith in priests and clergy.  Of course their beliefs were directly opposite of the accepted beliefs of the Roman Catholic Church who labeled them heretics.  During the Inquisition the Roman Catholic Church teamed up with secular kings to capture and convert the Cathars and confiscate their lands.  Needless to say it did not end well for the poor Cathars.

Carcassone is a popular place for folks interested in Cathar history, conspiracy theories, the quest for the Holy Grail, and fans of the Dan Brown novel The Da Vinci Code.   It is a good place to base yourself to explore the city and its surrounding areas.  The Languedoc region is steeped in secrets, mysteries, and lore connected to Mary Magdalene, the Merovigian bloodline (the bloodline many believe to be the descendants of Jesus Christ and his wife Mary Magdalen), and the Knights Templar (you had to know they’d pop up in this region somehow!).

Located just 84 kilometers away is Montségur and its fortified hilltop château.  This castle was the site where the Cathars made their last stand against the conquering armies of the Crusades.  The siege lasted months and finally ended with many of the Cathars choosing to march into the flames rather than be captured and converted.  The stronghold built on the site of an older castle and Cathar Church is also believed to be home to many treasures including the Holy Grail.  You can walk around the hill or make the climb to the top to see the castle.

Renne-le-Château is 44 kilometers away.  It is a very popular place for conspiracy theorists and Grail hunters.  The small hilltop village is steeped in Magdalene and Merovigian lore.  In fact it’s church is dedicated to the Saint.  One of its mysteries involves the 19th. Century priest Berénger Saunière who is believed to have dug up a vast treasure (that’s one theory) or discovered some sort of deep dark secret he used to extort money from the church (that’s another theory).  What ever he did he somehow one day came up with large sums of money which he used to restore, rebuild, and build his house, the church, and the Magdalene Tower.  Other village lore say that Mary Magdalene lived there after the crucifixion and raised her child there.  Whether you’re a conspiracy theorist, a Dan Brown fan, or just a casual tourist you won’t be able to resist the mystic lure of the village when you visit.

So there you have it 4 must see French towns.  Each has something to offer folks with varying interests.  Ready to plan  your French adventure or perhaps your personal quest for the Holy Grail?  Call Savvy Nana Travel, we’ll help you build an awesome itinerary!