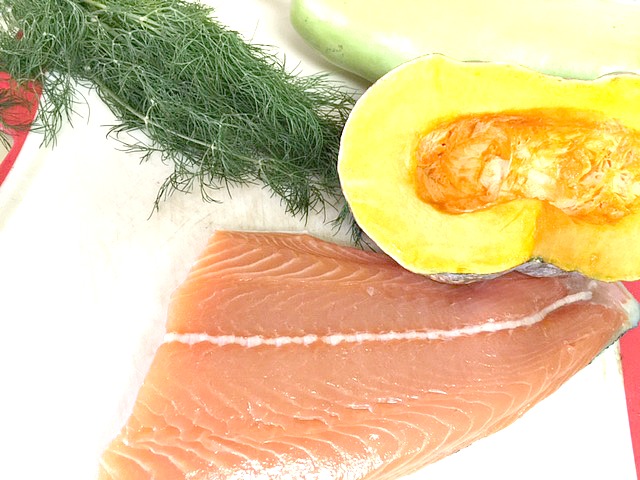 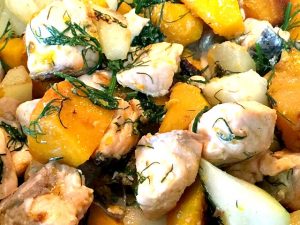 I think you all know by now that we own a very spoiled and finicky Siberian Husky named Cannoli.  Let me repharse, Cannoli, a spoiled and finicky Husky owns us.  I guess like most pet owners and animal lovers we tend to spoil our fur balls who bring so much joy to our lives.

My husband recently asked me who I spoil more, the grandkids or the dog, LOL!  As if!  The question should be who does HE spoil more. I categorically deny spoiling anyone, people or pets!  After all it was under his watch that Cannoli decided she preferred expensive pouches of Blue Wilderness dog food toppers over the dry food it was supposed to top.  So what does brilliant husband do while sensible wife is away?  Why of course he was feeding  spoiled mutt 4 pouches a day at a cost of almost $2 a pouch on top of her Blue Wilderness dry food (which I’m told she picked out and only ate when absolutely starving).  Ouch!  To be fair she did gain some needed pounds, which my hubby explained was the main goal to begin with.

Well when I got home I had to whip both mutt and husband back into shape!  It wasn’t easy because Cannoli had a very vocal advocate on her side, aka dear husband who called from work several times a day  to ask if Cannoli was eating.  For the first few days Cannoli absolutely refused to eat the dry food, she left it for the wild birds who now due to free food like to hang out in our yard!  I on the other hand was not going to relent, well not at $8 a day anyway.

We tried mixing in canned food instead of the topper.  That had mixed reviews from the miserable mutt!  She didn’t like the pate style, not that I can really blame her, that’s the pureed stuff that really looks unappealing.  She somewhat preferred the grills and stews which were chunks of meats and veggies.  But she definitely didn’t like the dry.  I was baffled, she was originally on Merrick dry food, a very good grain free high protein food that our Doberman Portia thrived on.  I had switched her to Blue Wilderness that other Husky owners were gushing about.  She had liked it!  Of course I had to keep various flavors, she likes variety.  But then for whatever reason she decided she didn’t like it after all.

In the end I switched her dry food to Solid Gold, a holistic and natural brand which my vet assistant recommended and is highly recommended by Pet Food Talk’s review.  But I wasn’t going to keep a variety of flavors this time, she would have to eat the High Protein Barking at the Moon flavor.  I did decide that toppers were a must but they would be homemade, it would be healthier, provide the variety the finicky pup seems to need, and be cheaper.  So I’ve been making homemade dog food toppers for the last couple of months.

(I feel that I must say this for new pet owners.  If you’re going to switch dog food BRANDS do so slowly by mixing small amounts of the new food with the old.  You do this over a week or so increasing the amount of new food mixed in daily.  I usually wait until I’m low on the old food and buy a small bag of the new one to mix until I’m sure that it works for her.)

Anyway toppers are very easy to make and can be frozen until you need them.  I usually cook up a batch, store them in small freezer safe containers (I reuse the round plastic containers from KFC, the red topped ones that the sides come in when you buy individual meals – I’ve been saving them for years and have build up quite a stash.)

I’ve shared my recipes for Beef and Chicken toppers in previous posts.  Today I’ll be sharing a Salmon & Dill topper which is very healthy for dogs.  Salmon is good for dogs, it’s a good source of the fatty acid Omega 3 which keeps her coat shiny and healthy, it also helps boost her immune system.  Dill is also good for dogs, it helps calm their stomach and is rich in vitamins and minerals.  The other ingredients in this topper are 2 types of  squash which also have health benefits for your dog.  They are in potassium which may help in reducing heart failure and Vitamin A and Calcium which help keep a dog’s kidneys healthy.

Now remember this is a dog food topper.  It’s designed to make dry food more appealing.  It is not meant to replace commercial dog food.  I use only about a 1/4 to top her Solid Gold dry food.  If you’re looking to eliminate commercial dog food from your dog’s diet that’s fine, but you must use a balanced recipe to ensure your dog gets the proper nutrients.  Commercial dog foods are balanced to provide your pet with the nutrition they need, homemade food may lack some essential vitamins or minerals your pup needs.  You may have to give your dog supplements to meet her needs.  Before you switch to homemade dog food consult your vet and find a good well balanced recipe.

Having said all that here’s the recipe for Salmon & Dill Dog Food Topper! 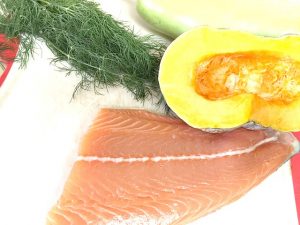 Add Salmon and cook until it’s no longer opaque.  It should turn somewhat white in color.

Add squashes and cook about 2-3 minutes.

Add broth and simmer until squash is tender.  No more than 10 minutes.

Cool then portion out in freezer safe containers.

Toppers should keep in the freezer about a month.  Thaw them out as needed.  I’m not sure if it keeps more than a month because we use it all within a month.  The containers I use hold about 1/2 cup of topper which is good for 2 feedings.  I thaw one out a day and store in the fridge until I’m ready to use it. 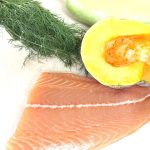 Toppers should keep in the freezer about a month. Thaw them out as needed. I'm not sure if it keeps more than a month because we use it all within a month. The containers I use hold about 1/2 cup of topper which is good for 2 feedings. I thaw one out a day and store in the fridge until I'm ready to use it. 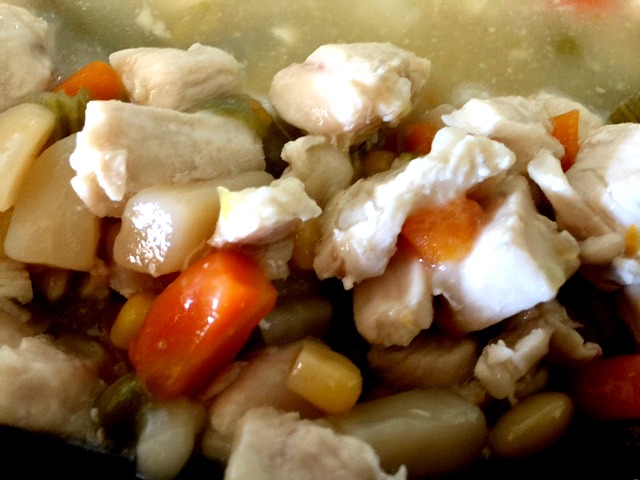 I think everyone knows that we share our home with a very spoiled and finicky almost 2 year old Siberian Husky named Cannoli.  For the last few months we’ve been trying to put some weight on her.  This has proven to be a difficult task, not only is she finicky, she’s very active too!

We’ve tried everything to get her to eat her dog food, including switching brands from Merrick, to Blue Wilderness, and now to Solid Gold. All very good dog food, and all on the high end of the spectrum as far as dog food costs.  We’ve tried both wet and dry food, and a mixture of both, not to mention a variety of flavors.   Nothing seems to work, she turns her nose up at them.  In desperation we tried Blue Wilderness Dog Food Toppers.  She liked those and picked the toppers out of the dry food.   But she can’t live, much less gain weight on toppers alone.

Toppers are meant to make dry food more appealing, they come in small 3 oz. packets which cost almost $2 each.  If I had to feed her just toppers, she’d need almost 6 packets a feeding, and she gets 2 feedings a day, that would cost over $20 a day!

Then I noticed the toppers looked like meat cubes in gravy.  After discussions with our trainer and breeder we decided that homemade toppers would work.  The toppers aren’t meant as a meal, just about 1/4 cup added to her dry food should work.  So I started making her toppers and she loves it! It’s even gotten her to eat the dry food mixed in with it! 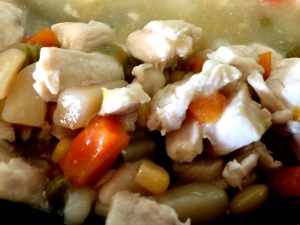 Since it was chicken I didn’t make it in the crockpot, I didn’t want the chicken to get too soft and mushy, she doesn’t do mushy!  I told you she’s finicky!  I basically stir fried chicken cubes, added some mixed veggies and low sodium chicken broth.  I thickened the broth with a bit of corn starch and voila a new topper for Cannoli.

I make a large pot of toppers, put them in freezer safe containers, and thaw them as needed.  One recipe lasts a month, best of all it cost lest than $10!

I must add that this recipe is for dog food toppers.  It is not meant to replace dog food.  Dogs need the balanced nutrients in commercial dog food.  However if you want to make your pet homemade dog food you sure can.  But before you rush to the kitchen to cook up a batch please do your research, there are many recipes out there.  You may also have to give your pet vitamin and mineral supplements to make up for the nutrients homemade dog food may me lacking.  Better yet consult your vet before you switch completely from commercial to homemade dog food, he or she will be able to tell you what nutrients are best for your dog.

I also have to add that I know it’s tempting to give your pet left over stews but don’t!  Most of us season our stews with onions and garlic, these ingredients are toxic to your pet.  That’s why I cook for Cannoli, her food is  unseasoned and definitely don’t contain onions and garlic.  Before you cook anything for you dog check the list of human foods that are toxic to pets so you can avoid them.

Having said that here’s my recipe!

1 Can Organic Mixed Vegetables – make sure it has no onions, garlic, or other ingredients that aren’t dog friendly

Stir into chicken mixture to thicken.

Cook until broth is desired thickness, but no more than 10 minutes.

Thaw when ready to use and stir into dry food.

If you have a favorite recipe you like to make for your fur baby drop us a line.  We’d love to hear from you!

If you liked this recipe subscribe today!  Don’t miss a tip, DIY idea, recipe, or pattern! 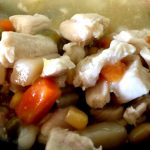