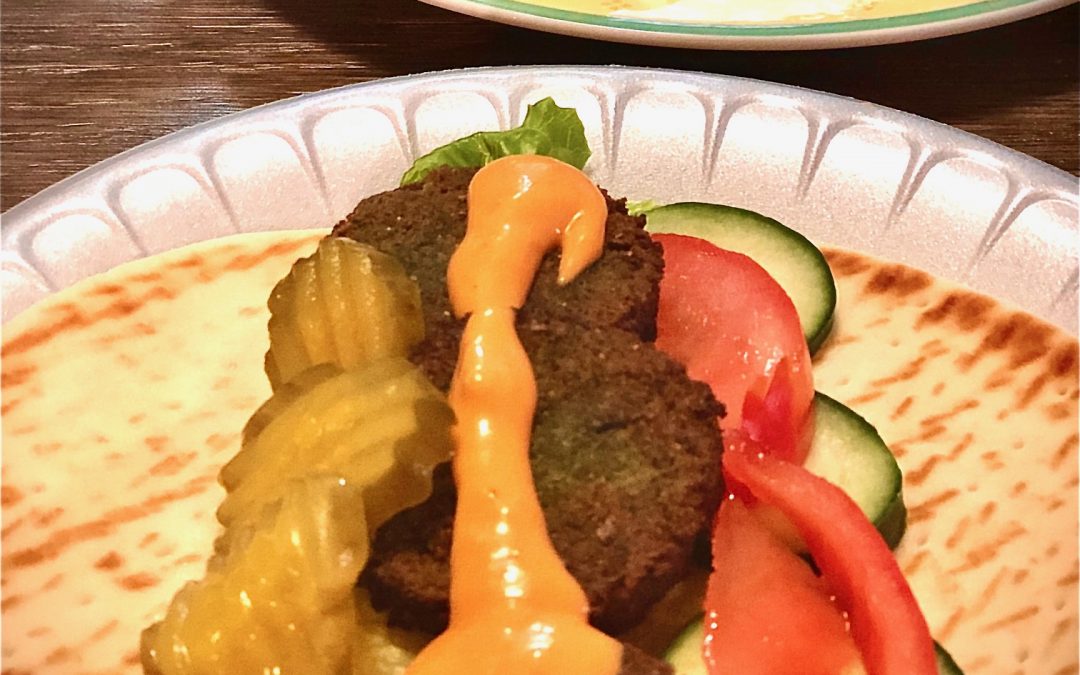 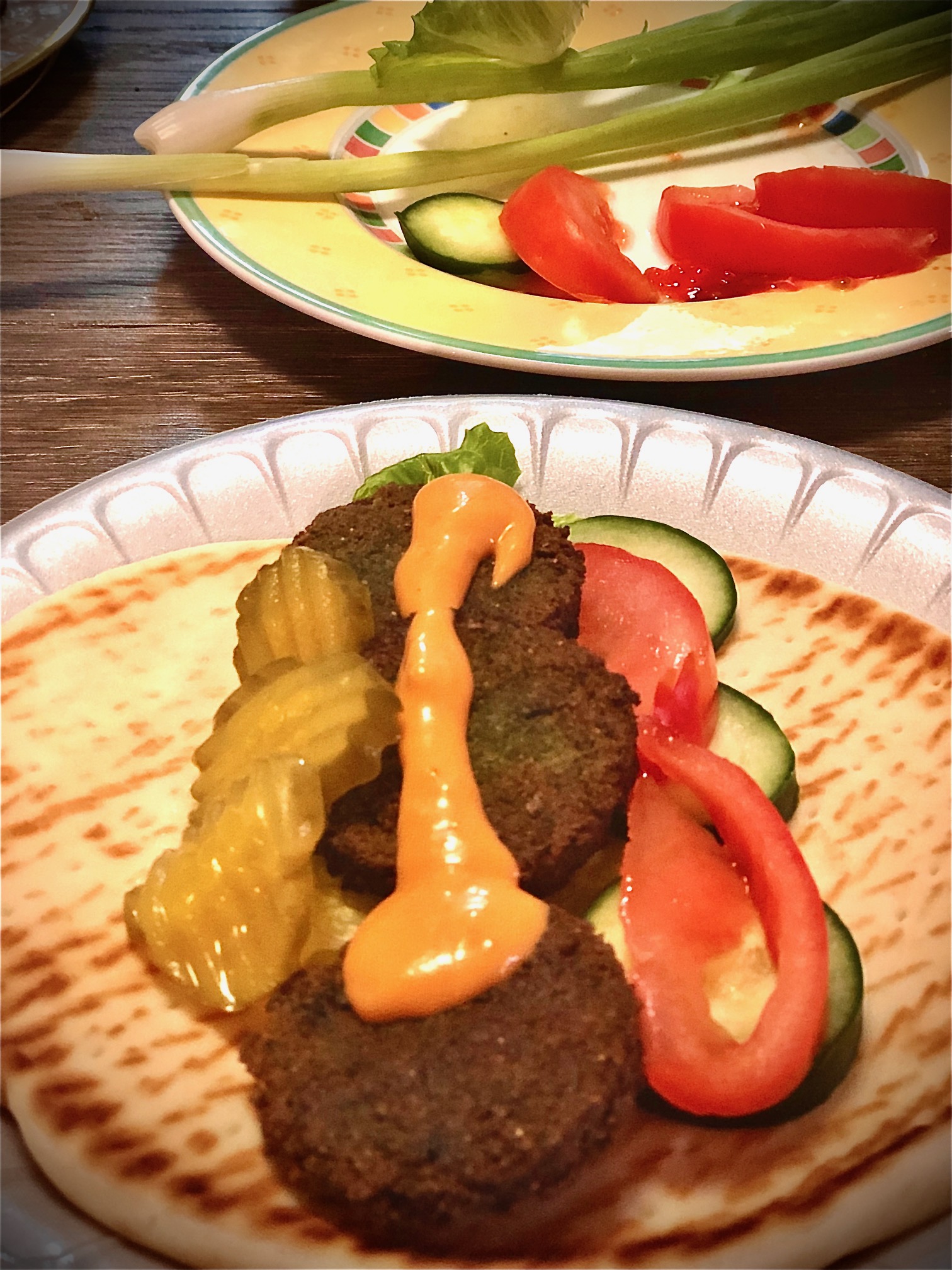 Falafels are traditional Middle Eastern deep fried patties or balls made from chickpeas, fava beans, or both.  They’re usually found stuffed in Pita bread or rolled in a flatbread along with fresh and pickled veggies and topped with a tahini sauce, that’s a Falafel Sandwich.  They are also eaten with fried eggs, hummus, babaganouj, and pickles for breakfast or served as mezzes and snacks.

My first encounter with falafels was at a kiosk in New York city where I grew up.  Buying a falafel sandwich from this kiosk was a treat when we spent the day at the near by park.  Then my family moved to Hawaii in the mid-70’s where there were no kiosks selling “ethnic” foods and so I didn’t have falafels again until I married my husband who is of Palestinian decent.  Imagine his surprise when I told him I actually knew what falafels were!

As newlyweds in Hawaii we had to figure out how to make falafels at home; as I new bride I had no clue!  Remember back in the 80’s there was no google, no pinterest, no instagram, or any kind of internet that would find a recipe in seconds.  I had to rely on cookbooks from the library, not really helpful.

Then we found a box of falafel mix at a local health food store.  Just add water and fry.  It wasn’t the best, but we made do.  I started experimenting with the boxed mix and found that adding finely chopped fresh parsley improved the taste.  Started adding more spices and pretty soon I figured I may as well by pass the mix and make it from scratch.   That didn’t go so well until I managed to buy a food processor, now I was in business!

As I was exploring the makings for falafel from scratch we started traveling all over the world.  Of course travel opens up your life to different places, foods, and cultures and our travels in the Middle East definitely helped my falafel making.  We loved the falafel sandwiches at Mr. Falfala in Cairo and the ones found on the streets of Diera in Dubai.  But nothing beats the fresh falafels served at Hashem’s and Abu Jbarra in Jordan!  On our last trip to Dubai this year we discovered that Abu Jbarra opened a place by the Dubai Mall, we ate brunch there almost everyday!

Anyway those trips to Egypt, Dubai, and Jordan whetted my desire to make falafels at home that would be close to the ones served in the places we loved.  I say close because I doubt I’ll ever figure out the exact match to Hashem’s falafels served in this little alley in downtown Amman.

I make large batches of falafels so that I have enough to freeze for future use.  Raw falafel paste freezes beautifully!  This way I don’t have to haul out the food processor every time I want to fry falafels and I always have some handy when  I have a yen for a falafel sandwich.

I’ve found that using fresh ingredients makes the difference between decent falafels and amazing ones!  So I use fresh cilantro, parsley, and dill as my primary seasonings; they will turn your mixture green, but the greener the falafel is the better it tastes in my opinion.  I also use dry chickpeas never canned.

It takes a bit of planning to make really great falafels, but believe me it’s so worth the effort!

Pour dried chickpeas into a bowl and mix in baking soda.

Cover with water and soak overnight.

Rinse chickpeas in cool water and drain in a colander.

In a food processor load in this order:

Cilantro leaves and stems (you don’t have to use all the stems but do use the leaves), Parsley, Dill (prepare and use Parsley and Dill the same way as Cilantro).

Turn on processor and grind until it is a paste

If freezing place paste into freezer safe containers and freeze.  Thaw before cooking.

Test that oil is hot enough by dropping a small amount of falafel paste in; if oil starts bubbling around the paste your oil is ready for frying.

Form paste into small 1″ balls or patties and drop into hot oil.

Fry until all sides are brown, cooked falafel will float. 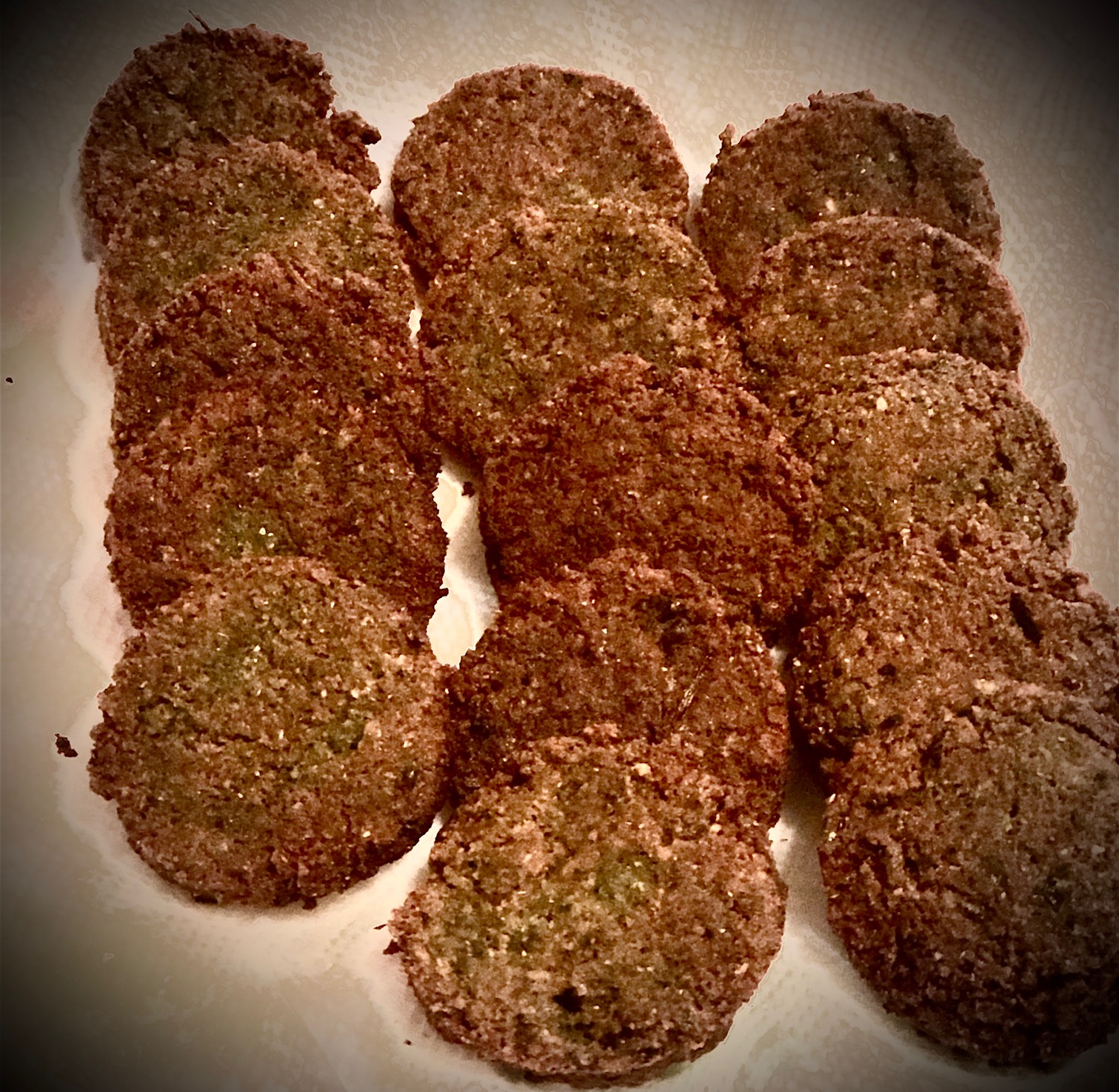 Drain on paper towels and serve as a sandwich filling or by itself for breakfast or as mezzes. 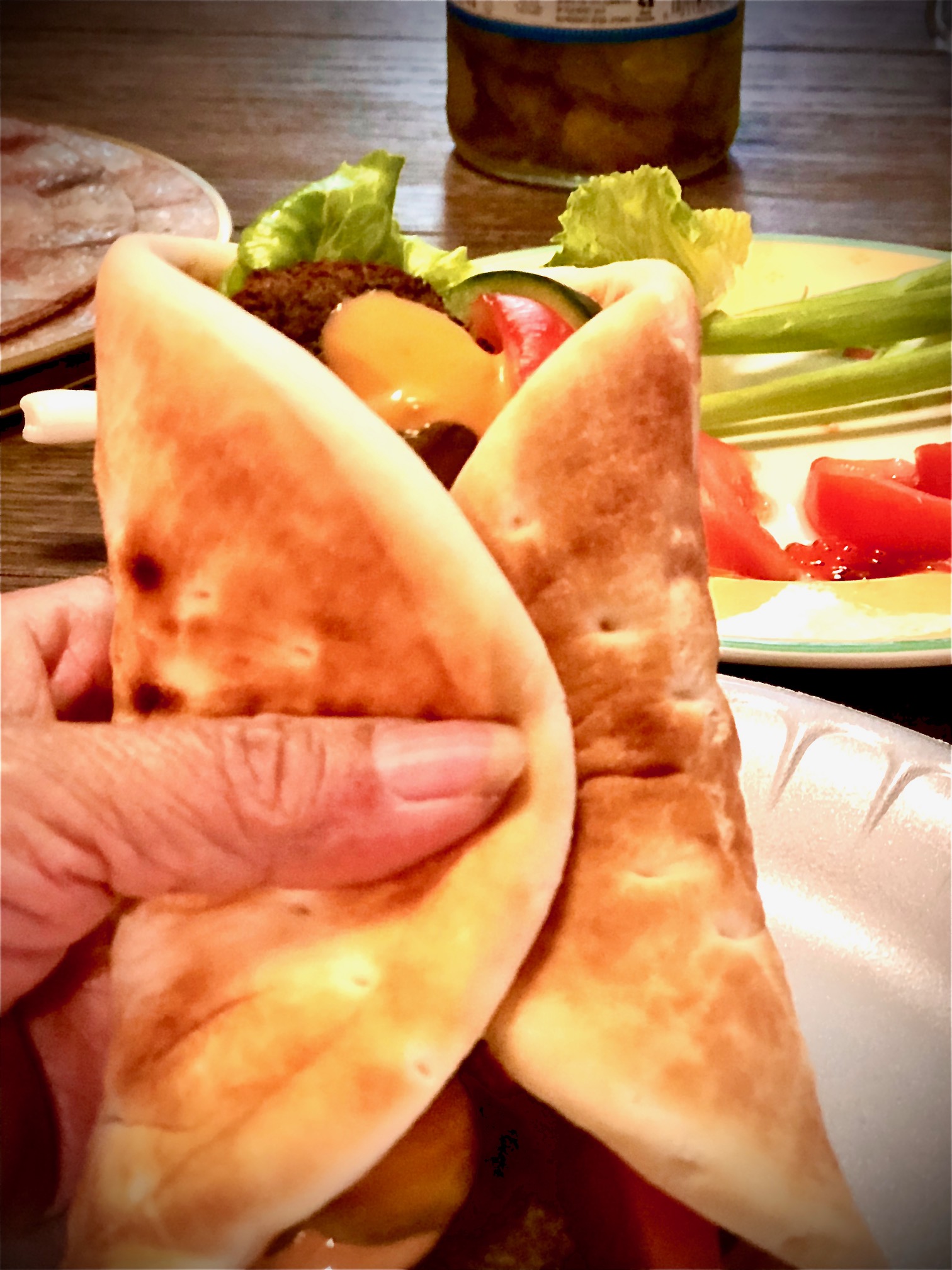 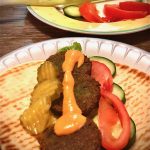 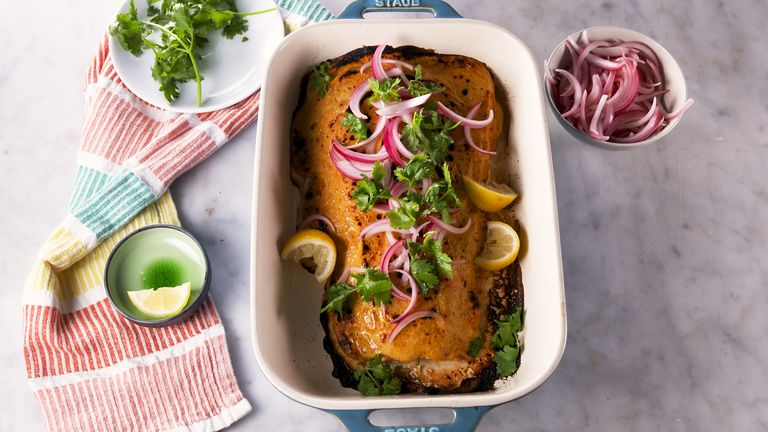 In an effort to eat less meat, we like to have a few fish alternatives in our arsenal to satisfy our cravings for their meat counterparts. Instead of hitting up Seamless for your tandoori chicken, why not try a salmon stand-in?! This version comes together in very little time, and it packs a ton of flavor. The pickled red onions might seem like a superfluous add-on, but trust us, they’re SO worth it.

Made it? Let us know how it went in the comment section below!

1. Make quick pickled onions: Stir together vinegar, water, sugar, and salt in a medium heatproof bowl. Microwave until hot and sugar and salt dissolve, stirring every 30 seconds. Stir in onions and let sit.

3. Place lemon slices on bottom of 9”-x-13” baking dish and arrange salmon on top. Season salmon with salt and pepper. Spread yogurt mixture in an even layer over top of salmon.

4. Roast salmon until cooked through and flakes easily with a fork, 20 to 25 minutes. Turn oven to broil and broil until golden if desired, about 3 minutes. 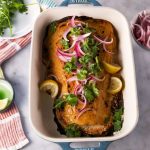 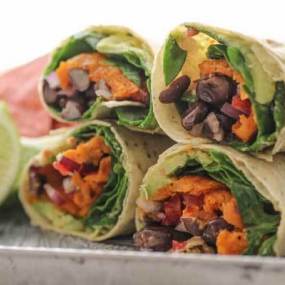 You want to know what I really love? Practically effortless meals. At least once a week, I make a big batch of my smoky black beans and cumin roasted sweet potatoes. We have a tendency to eat them along in tacos one night so I save the remainder for quick lunches for successive few days. Some weeks past I discovered a direction from Everyday Food for Southwestern Chicken Wraps and that I directly thought that I ought to place this week’s leftovers to figure and create my family Southwestern green goods Wraps.

I substituted the chopped chicken within the original direction for cooked sweet potato rounds and that I swapped out the cream unfold for dip, creating these wraps vegetarian too. The most effective issue concerning this direction is that it’s versatile! Baked curd, grilled portabella strips, or fajita veggies would additionally create delicious additions to those wraps.

1. Place all of the ingredients, including the liquid from the beans, into a medium saucepan and simmer on low heat for 5-8 minutes, until warmed through. Drain the beans (don’t rinse them though!) and set aside.

To prepare the sweet potatoes:

1. Preheat the oven to 425°F.
2. In a large mixing bowl, toss the sweet potato rounds with the olive oil, cumin, salt, and pepper. Spread in an even layer on a baking sheet lined with parchment paper.
3. Roast the potatoes for 10 minutes, flip them and roast 10-15 minutes more until they are crispy and golden brown on the outside.

To assemble the wraps:

1. Spread the tortillas with guacamole, leaving a 2-inch border. Divide the spinach, sweet potatoes, black beans, tomato, and onion evenly among all 4 tortillas, piling the toppings in the center of each. To form the wraps, fold two sides of the tortilla over the filling, then roll tightly, ending seam side down. Cut in half down the center to serve. 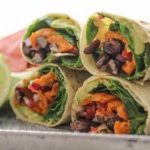