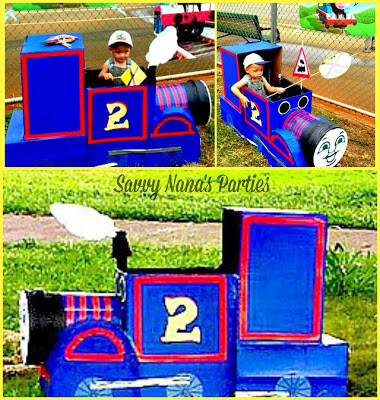 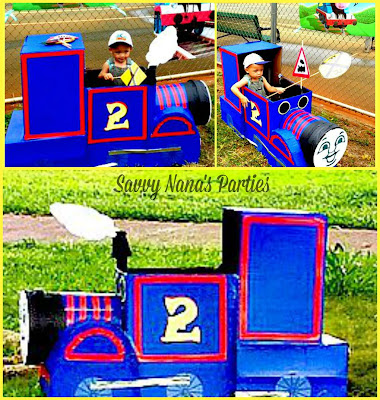 We recently hosted my grandson Jett’s 2nd. birthday party at our neighborhood park.  He’s really into trains at the moment so what better than a Thomas the Train themed party!

Photo Booths are always lots of fun and this party was screaming for a Thomas the Train photo booth!  We made this one out of large cardboard boxes.  a Lowe’s large plastic bucket, paint, and duct tape then trimmed it with die cut cardstock, foam board, a paper towel roll, and styrofoam coffee cup.  I’m not going to say it was easy, it was 3 days in the making and was truly a team effort, but it turned out nicely and both kids and adults loved it!

Here is a photo tutorial to help you make your own train photo booth for your next party. 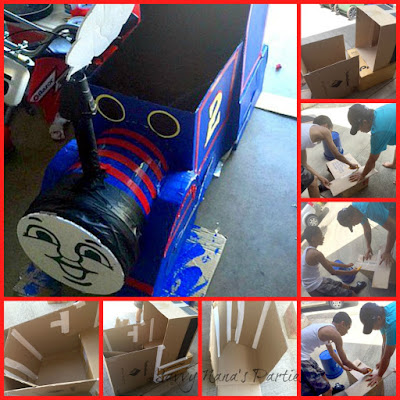 Cut the top and one side off the first large box, save the cut side to use as a brace and for the rounded trim.

Cut the top off the second large box.

Seal the slim medium box tops with duct tape, you may want to stuff the box with newspaper if the sides are flimsy.  One box serves as the train’s bottom part and also a seat, so you want it to be fairly sturdy so the kids don’t fall thru. The other will be the front of the train and will be supporting a plastic bucket.

Position the slim box behind the open end of the first large box.

Tape all the pieces together, cover any gaps with the duct tape.  We recommend using white duct tape to tape the boxes together as you will paint over it.

Cut 2 strips of cardboard the same height as the first large box.  Tape it diagonally to the front corners of the box to brace the box.

Tape the second slim box to the front of the large cardboard box.  The width should be the width of the medium box in front of the train.

Using the cut off pieces of cardboard cut out 2 semi circles the same width as the box you just taped to the front and should half as tall as the large box.  This is to be the wheel hubs at the front of the train.

Cut out 2 long strip of cardboard that will cover the rim of the semi circles you just cut out.  Bend the strips to fit along the rounded part of you semi circles. 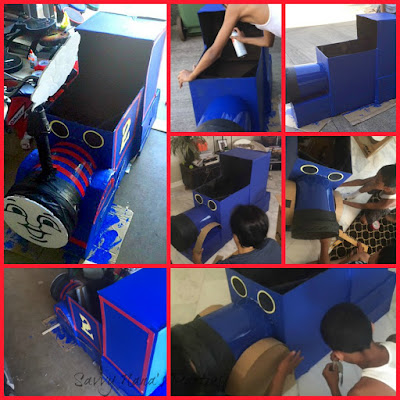 Paint the outside of the train with semi gloss paint.  We used blue as that is Thomas’ color, but you can paint your train any color you want.

Once the paint is dry you’re ready for the trim.

Position the semi circles and trim you set aside on either side of the bucket.  Secure with tape and paint.

Cut out (6) 8″  circles for the wheels using gray cardstock.  Draw the spokes with a black sharpie.

Cut out (2) 5″ circles for the lights using yellow cardstock.

Cut out (2) 4″ circles for the lights using black cardstock.  Glue the black circles on top of the yellow circles then glue them on to the front of the train.

Cut out (2)  10″ numbers in yellow or the color of your choice.  We cut out the number 2 because Jett was turning 2, but Thomas’ actual number is 1; you can use whatever number you want.  Glue the number onto the train body as shown in the picture.

Glue the wheels onto the bottom of the train – 3 on each side.

Trim the edges and the top of the bucket with red duct tape using the photos as your guide.

Cut out a circle the same diameter as the bucket’s top from foam board.  Draw on a face using a black sharpie.  Glue the face to the front of the bucket.

Place the styrofoam coffee cup on the top of the paper towel roll.  Cover the whole thing with black duct tape.  This is your smoke stack.  Tape it on to the top of the bucket.

Cut out a cloud shape from foam board  for steam and tape it to the top of the smoke stack.  And your’re done. 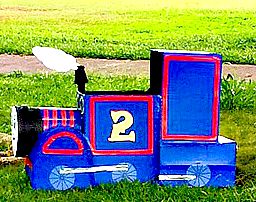 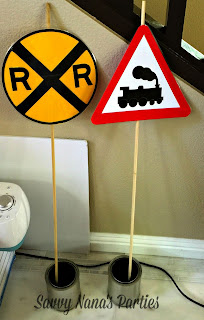 I made these railroad signs on my Cricut using cardstock.  I laminated them and taped the backs to wooden dowels.  I stuck the signs into paint cans weighted with gravel.  They could be used as props or a backdrop for the train. 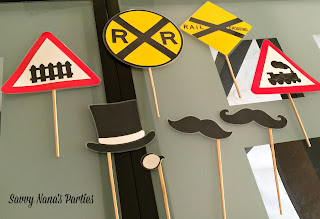 To complete the photo booth I made these props on my Cricut too.  I laminated them and taped them on to chopsticks. 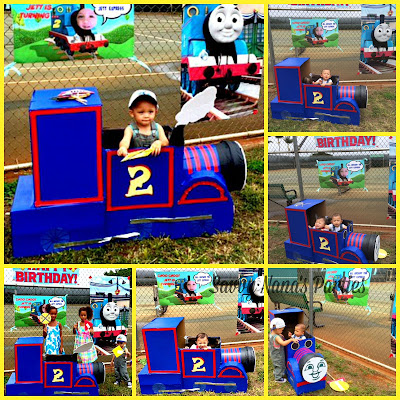