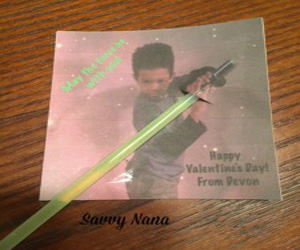 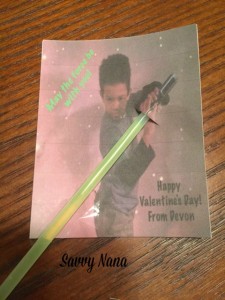 Valentine’s Day is in a couple of weeks.  It’s a fun holiday when you have school age kids, they love sharing cute Valentines with their classmates.  Every year finding the right Valentines for my grandson to bring to class can be a challenge.  They think most of the cards sold at stores are too “girly”.  This year it was a bit easier thanks to the new Star Wars movie.  I had seen similar Star Wars Valentines on Pintrest last year but Devon, my grandson wasn’t interested.

On my recent visit to Atlanta I took the boys to see the new Star Wars movie, they loved it.  When we got home I asked Devon if he wanted to give Star Wars Valentines out this year, he thought it would be super cool.  So with his help and that of his brother, Dion, we made the cool valentines.

These Valentines are so easy to make, we made 24 of them in less than an hour.  Instead of giving out candy Devon will be giving out glow sticks instead.  I’m sure his classmates’ parents will be happier!  Get a jump start on Valentine’s Day with these easy and inexpensive cards!

Here are some quick and easy to follow instructions to help you make Star War Valentines for your child to give classmates this year.  (Devon happily proclaimed they were “boy” valentines, but girls can give them out too!) 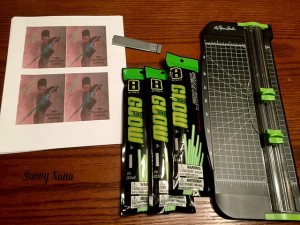 Photo of your child holding a toy light saber, if you don’t have one use a flashlight 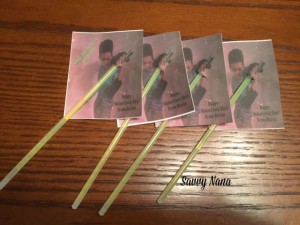