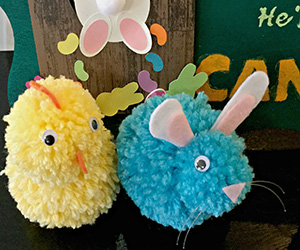 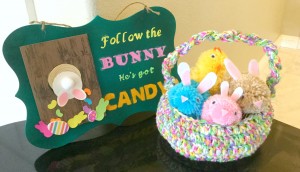 Pom Poms are one of the easiest and cutest way to dress up holiday decor, clothing,  and gifts.  They make great add-ons to gift wrap and tags, banners, baskets, and more.  They are very inexpensive, specially if you make them at home using scraps of yarn.  Best of all they are so easy to make and are a great project to do with your kids.

I love to add pom poms to my crochet hats, they make them super cute. But since it’s Easter in a couple of weeks I’ve been making these adorable pom pom bunnies and chicks to add to the Easter baskets I’m making for my grandchildren.

I used Pom Pom makers  to make the pom poms for my bunnies and chicks but if you don’t have any you can still make pom poms very easily using a fork or toilet paper rolls and a pair of sharp scissors.  Here’s a tutorial from Handimania to show you how to make pom poms using a fork or toilet paper rolls.  If you prefer to purchase a pom pom maker here’s a link for that too! Sets of Pom Pom Makers start at around $6.  Or you should be able to find them at your local craft store like Joann Fabric & Crafts.

Here’s how I made my cute Pom Pom Bunnies and Chicks!  I should add that it’s best to use sharp scissors, it makes cutting the yarn so much easier and less painful on your hands and fingers!

Pom Pom Maker or a fork or toilet paper rolls

Felt (for ears, nose, etc.) – I used stiffened felt sheets, it made the ears stand up better, but you can use regular felt

Fishing Line for the whiskers

Small White Pom Poms (for tail) You can make your own or use store bought ones.

If you’re using a fork or toilet paper rolls to make your pom poms make 2 pom poms (one large, one small) in your color of choice for bunny, and 2 more for the chick.

If you’re using a pom pom maker read on. 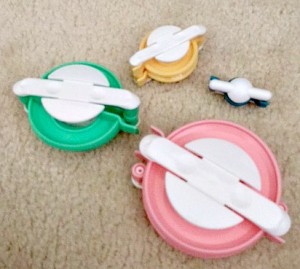 Here is my set of Pom Pom Makers.  I got them from Amazon. 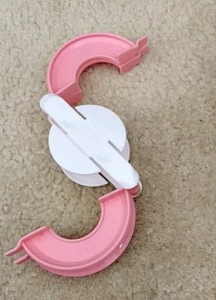 Open the maker’s arms.  It should look like an “S”.  You will be winding yarn on both arms. Each curve of the “S” has 2 parts, be sure you hold both parts together and wind yarn around both.  There is a gap between the 2 parts, this is where you insert scissors when you are ready to cut.  [spacer height=”-20px”] 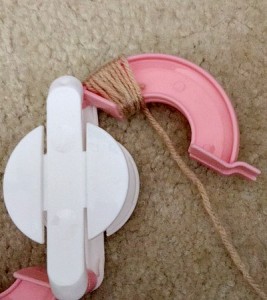 The object of this tool is to wind the yarn from one end of each curve of the “S” to the other end.  So stating on the left side wind yarn tightly towards the right side.  You can tuck the loose end under the yarn as you wind.  Continue winding until you reach the right end. You can wind yarn back and forth from end to end for fuller pom poms, just be sure you end on the right end so you can tuck the end between the gap that’s on that end .  I wound mine back and forth a total of 5 times.

When you are done with the first curve shut it so it form a semi-circle, do this so the yarn you just wound will not unwind. 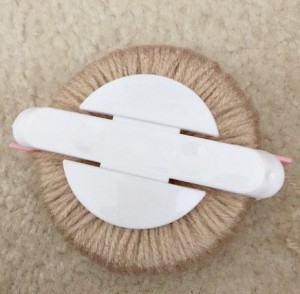 Remember to wind yarn on the other curve of the “S” the same number of times you wound it on the first curve.  This is what it looks like when both curves have yarn.[spacer height=”20px” id=”2″] 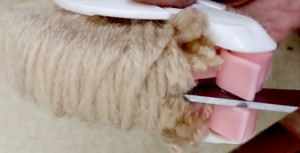 Turn the maker on it’s side and insert scissors in the gap between the 2 curves.  Hold both curves shut as you cut. 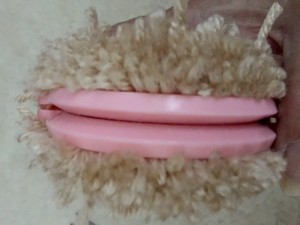 This is what it will look like when you have cut both sides.[spacer height=”-20px”] 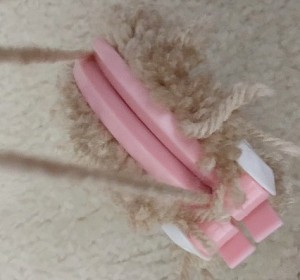 Slip a strand of yarn  between the groove of the pom pom maker.[spacer height=”-20px”] 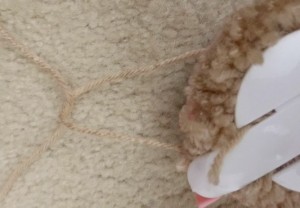 Pull yarn tightly and make a knot to secure the pom pom.  I wind the strand of yarn back around the center and knotted a couple of times to make sure it was tight and secure. 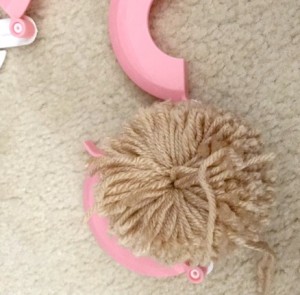 Open the arms and pull the top maker off to release the pom pom.  Gently work the pom pom off the bottom part of the maker. [spacer height=”-20px”] 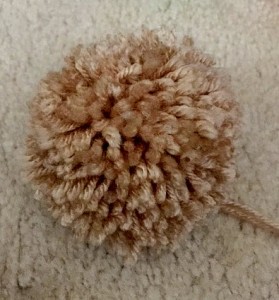 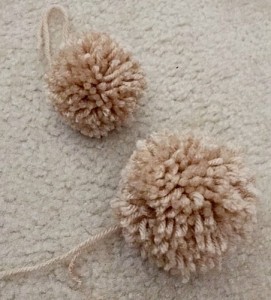 When you have 2 pom poms made, one larger one for the body and another smaller one for the head, tie them together by knotting the 2 long strands in the center together.[spacer height=”-20px”] 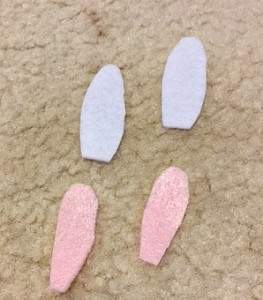 Cut out ears from the felt, I honestly just cut the shape without a template.  2 White and 2 smaller ones in pink.

You can also cut a triangle out of the pink felt for the nose.[spacer height=”-20px”] 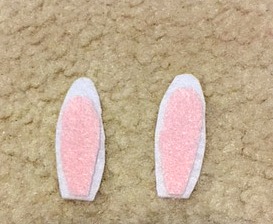 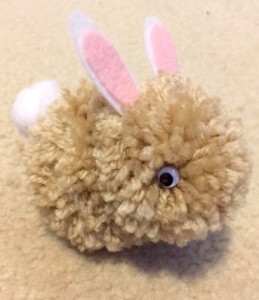 Glue the ears between the head and body.  Glue the eyes in place.  Cut 2 strands of fishing line and glue to the triangle for the nose.  Glue the nose in place.  Also glue the tail in place. 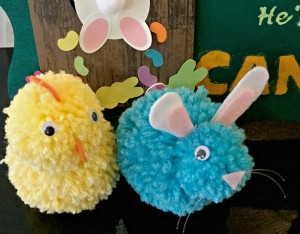 Make the pom poms and attach together like the bunnies.

Cut out a triangle for the beak and top comb from orange felt.

Glue comb to top of head and beak to the front of the face. 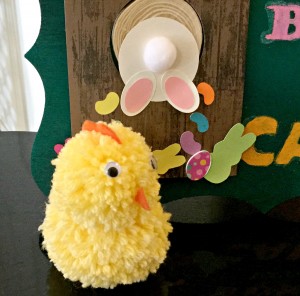 For these Mason Jar bunnies you make pom poms about the same size as the jar lids.  Then cut out the feet, two larger ovals in white, 2 smaller pink ovals.  Glue the pink ovals on the white ovals and glue them on the pom pom.  Glue on a small pom pom for the bunny tail.

Fill jars up with Easter candy, I used Coconut M&M’s.  Tie a ribbon around the jar and it’s good to go.

Great gift idea or a prize for your Easter Egg Hunt!